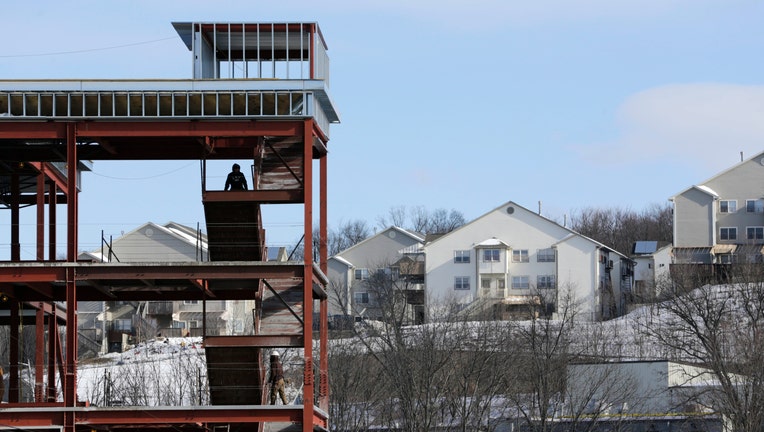 This Feb. 16, 2017 photo shows new construction, a frequent sight in Kiryas Joel, N.Y. The insular Hasidic Jewish village wants to expand, raising tensions with neighbors who fear the growth could overrun their slice of suburbia. They fear an expansi

NEW YORK (AP) — New York Attorney General Letitia James is accusing a Hudson Valley town and county of “a concerted, systematic effort” to keep Hasidic Jewish families from moving into the town, where a developer says bias is blocking hundreds of planned homes.

James filed legal papers Thursday seeking to join a developer's suit against Orange County and the town of Chester over the way they have handled a plan for a 431-home community in the town about 60 miles (96 kilometers) north of midtown Manhattan.

The Greens at Chester project has been met with what the local governments call legitimate concerns about infrastructure and building codes. But the developers and James say what's really at play is a prejudiced drive to stop the project.

“Blocking the construction of homes to prevent a religious group from living in a community is flat-out discriminatory,” James, a Democrat, said in a statement.

A lawyer for the town suggested James' office was interloping to try to pressure the town into settling.

“There is no reason for it to be unnecessarily involved in this matter on behalf of a private developer that can sufficiently represent itself,” Chester attorney Mary Marzolla said in a statement.

Town Supervisor Robert Valentine, who won office on Republican and other lines, said he was disheartened by James' actions and looked forward to an eventual court decision “based on input from both sides and not on political influence.”

Hasidic enclaves have sprouted in parts of Orange County, and their growth has sparked concern and complaints from some other residents about development density, schools, and other issues.

The complaints have, in turn, fueled accusations of anti-Jewish bias.

“We remain deeply concerned by the blatant anti-Semitism arising out of Orange County," Evan Bernstein, the regional director of the Anti-Defamation League, a Jewish civil rights group, said Thursday. He commended the attorney general's bid to get involved in the Greens at Chester case.

It concerns a 117-acre (47-hectare) property where a previous, non-Hasidic owner got permission for the same number of homes, also after a long dispute with the town. Current owners Greens at Chester LLC bought it for $12.1 million in 2017.

The owners — who include Hasidic Jews but who say the development will be for everyone — and the attorney general say the town has thrown up such roadblocks as new home-size restrictions, additional road requirements, sudden demands for garages, and more.

An underlying motive, the developers say, came out in anti-Semitic comments that town leaders made in private and public meetings.

The developers accuse Orange County of maneuvering to get the state health department to require more information on the project's proposed water system, though the county had issued a permit for it.

“Asking the state to do its job and review constituent concerns about water quality is perfectly reasonable,” county spokesman Justin Rodriguez said Thursday, arguing that the attorney general should reconsider her claims against the county.

James is asking a court to order approval of the Greens at Chester, plus policy changes and monitoring. The developers are also seeking at least hundreds of millions of dollars in damages.