NYC nurses set to go on strike in 10 days

The nurses union has informed eight NYC hospitals that their members are set to go on strike beginning January 9.

The union that represents around 17,000 nurses gave management at the hospitals a 10-day notice that they plan to walk off the job if a contract is not reached by January 9.

Friday was the last scheduled day of negotiations as the contracts were set to expire on Saturday. The New York State Nurses Association, the union that represents the nurses, said it planned to continue bargaining up to the Jan. 9 strike date.

The union says that the notice is to give hospitals time to plan for the care of patients if a deal is not reached. A strike would include about 16,000 nurses at the eight privately-run hospitals, the union said.

"But the best way for management to protect patients is to listen to nurses and settle fair contracts that protect patient care in the next 10 days," the union said in a statement. 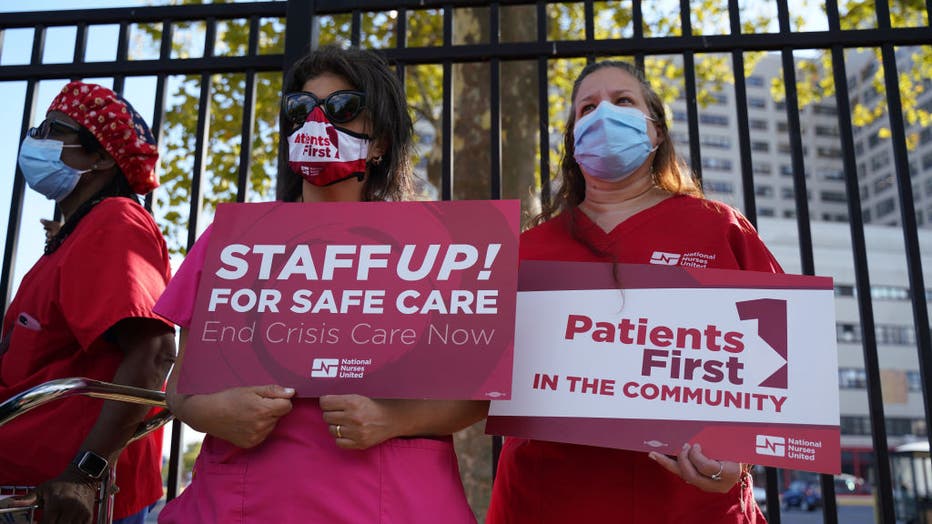 Representatives of several hospitals said Friday night that they remained hopeful contract agreements will be reached before a strike but said they are prepared to bring in outside workers as a precaution as they face high patient volume because of the "tripledemic" of COVID-19, RVU and the flu.

"While we have proposed unprecedented wage increases, totaling 17.5% over the life of a four-year contract, unfortunately, union leadership’s approach could force nurses to abandon their patients at the bedside at the height of the tripledemic," New York-Presbyterian said in a statement.

A spokesperson for the Mount Sinai Health System, Lucia Lee, said in a statement Friday night that the system's bargaining teams are continuing "good-faith efforts to pursue a contract with NYSNA (the union) that is fair to our community and responsible with respect to the long-term financial health of our organization."

The nurses have been calling for what they describe as safe staffing levels, fair wages, no cuts to their health coverage and health and safety protections in light of the "tripledemic."

They also want community benefits such as funding programs to recruit and train nurses from within the communities they serve.