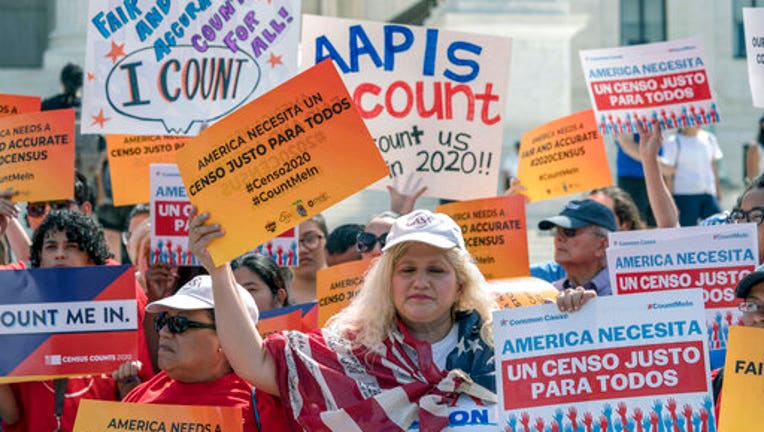 FILE - In this April 23, 2019 file photo, immigration activists rally outside the Supreme Court as the justices hear arguments over the Trump administration's plan to ask about citizenship on the 2020 census, in Washington. Leaders of advocacy groups

The U.S. Supreme Court decided a citizenship question won't be on this spring's census form, but that doesn't mean the fight over it has ended in courtrooms across the country.

In Maryland, civil rights groups are trying to block an order from President Donald Trump to gather citizenship data through administrative records. In New York, other civil rights groups are seeking sanctions against Trump administration attorneys for not turning over documents related to the citizenship question's origins. Democratic lawmakers in the District of Columbia are fighting for similar documents, and Alabama officials are suing the Census Bureau to keep immigrants living in the country illegally from being counted during the process that determines the number of congressional seats each state gets.

All of the lawsuits touch on whether the number of citizens, instead of the total population, will be used for redistricting or apportionment — the process of divvying up congressional seats among the states after the 2020 census. Opponents say doing so would dilute the influence of minorities and Democrats, which they argue was the true intent of the Trump administration's desire to add a citizenship question in the first place.

The U.S. Constitution specifies that congressional districts should be based on how many people — not citizens — live there. But the legal requirements are murkier for state legislative districts.

“The country is changing demographically, and people in power believe that the only way to stay in power is to disadvantage minority voters,” said Andrea Senteno, an attorney for the Mexican American Legal Defense and Education Fund, one of the civil rights groups that sued Trump in the Maryland case. “What we're seeing now is a reflection of that. It's really about political power in the long term.”

Supporters of the question say the U.S. should know how many citizens there are.

“It's important for us as a country to know how many people are citizens," U.S. Rep. Jody Hice, a Republican from Georgia, said last week during a congressional hearing.

Opponents argued it would intimidate immigrants, Hispanics and others from participating in the once-a-decade head count that determines how $1.5 trillion in federal spending is allocated and how many congressional seats each state gets.

House Democrats investigating the citizenship question's origins said a Trump transition adviser was in contact with an influential Republican redistricting guru, Thomas Hofeller, when the citizenship question was being drafted in 2017. Hofeller, who died in 2018, advocated using voting-age citizens, instead of the total population, as the population base for redistricting. In documents that surfaced after his death, he acknowledged his intent was to help Republicans and non-Hispanic whites.

In the District of Columbia, Democratic lawmakers sued Commerce Secretary Wilbur Ross and Attorney General William Barr for refusing to provide information for their investigation. The lawmakers say they need documents being withheld to determine whether Congress should take emergency action to protect the census from partisan political interference.

After the Supreme Court blocked the question, Trump issued an executive order for the Census Bureau to gather citizenship information through administrative records from federal agencies and the 50 states.

Gathering the citizenship data would give the states the option to design districts using voter-age citizen numbers instead of the total population, Trump said in his July order. A short time later, civil rights groups sued in federal court in Maryland, claiming the citizenship-data gathering was motivated by “a racially discriminatory scheme" to reduce the political power of Latinos and increase the representation of non-Latino whites."

The civil rights groups said in court papers last week that members of the Trump administration “conspired to reduce the political power of people of color” by following Hofeller's recommendation.

In Alabama, state officials and Republican U.S. Congressman Mo Brooks sued the Census Bureau to exclude people in the country illegally from being counted when determining congressional seats for each state. Their 2018 lawsuit claims Alabama stands to lose a seat if people living in the country illegally are included, diluting the state's representation in the Electoral College.

Even though the citizenship question won't be on the 2020 questionnaire, its opponents said plenty of damage has already been done. But Census Bureau director Steven Dillingham said last month in an interview with The Associated Press that he doesn't think the fight over citizenship will diminish participation.

“The citizenship question is over. We have experienced litigation, but I don't think there's any legacy to that," Dillingham said. “We want to make sure that we reach everyone and that everyone gets counted.” ____