A Denton County family grew a lot Wednesday morning when a couple adopted seven siblings. It's a sad story with a really nice ending.

Most have heard the phrase, "it takes a village."

But a light-hearted, more fitting description for Chris and Jessica Milam adopting seven siblings might be we are "becoming" a village.

"From the moment I read their profiles, I said, ‘Oh, these are the kids for us.’ They loved animals, they loved to craft, they loved plants," Jessica said. "We had an empty house we just moved into. We built a house to fill with kids, so we knew we had the space. We’re self-employed, so it makes it a little bit easier to take care of seven kids of various ages." 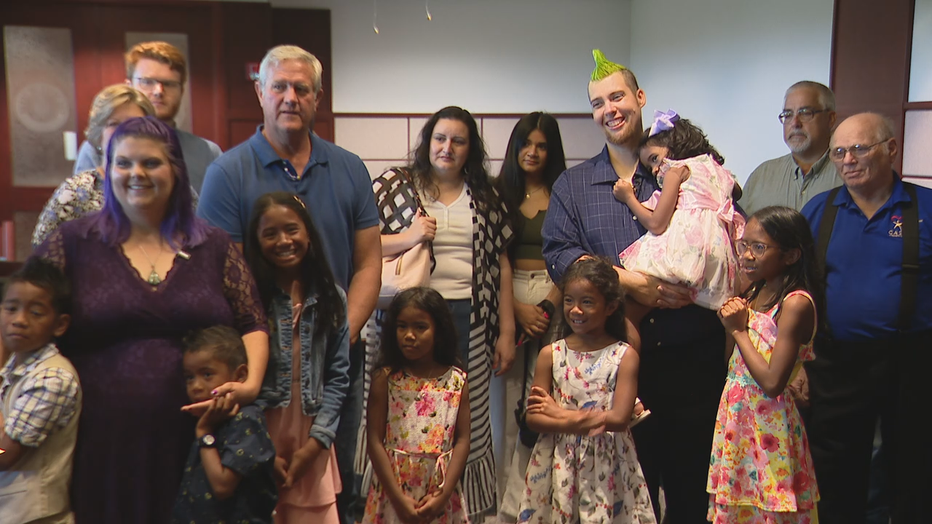 The two brothers and five sisters had been split up, living in three separate foster care homes in Texas for more than two years.

They are now together again, and not only do they have each other, but they also have a few pets.

"We have two snakes, one dragon, four cats, and one dog," they said.

Chris and Jessica had planned to become adoptive parents, but on a smaller scale.

From the beginning, they said they wanted these children, ages 5 to 12, to understand they would all be a family.

"All of them were like, ‘Can we just come home with you today, can we just come today?" Jessica recalled during one of the times they met with their kids.

"They were arguing about when they will be able to come," Chris added.

"They were trying to negotiate coming sooner and stuff. So, they were just so excited to really be together, but also to have parents that were just going to be their parents forever," Jessica said.

Now, after eight months, it is official.

"I’m going to find that it is in the best interest of these children that the adoption take place. I will grant the adoption, grant the name change, and seal the record. Congratulations," the judge said.