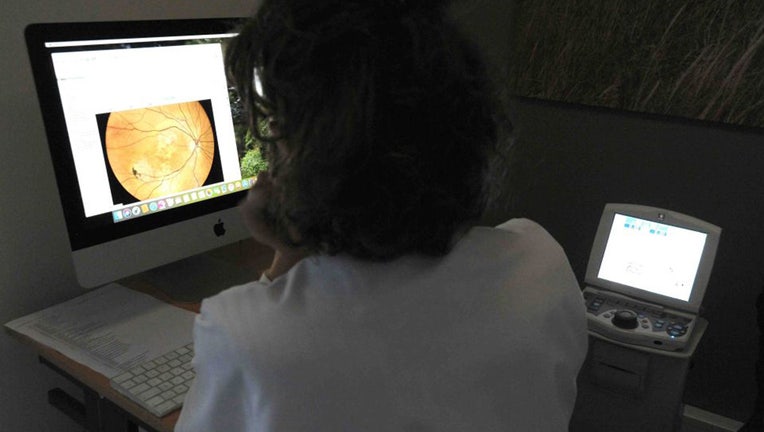 Researchers from the United Kingdom suggest a routine eye exam in conjunction with looking into past genetic data could help physicians predict whether or not a person could suffer a heart attack in the future.

A recent study out of the Usher and Roslin Institutes from the University of Edinburgh found that simply assessing the patterns of a patient’s blood vessels in their eyes along with traditional clinical factors could help predict a possible heart attack five years before it happens.

"The discovery could inform development of a simple screening process where heart attack risk could be calculated when a person undergoes a routine eye test, according to research presented at the annual conference of the European Society of Human Genetics," according to a university news release.

A model was developed to compare data from 500,000 patients from the U.K. Biobank (UKB) which included age, sex, systolic blood pressure, body mass index and smoking status, according to a news release. This data was combined with retinal images from each patient.

"Strikingly, we discovered that our model was able to better classify participants with low or high MI (myocardial infarction, also known as a heart attack) risk in UKB when compared with established models that only include demographic data. The improvement of our model was even higher if we added a score related to the genetic propensity of developing MI," said Ana Villaplana-Velasco, a Ph.D. student at the Usher and Roslin Institutes, University of Edinburgh, Edinburgh, U.K. and co-author of the study.

A person who is at higher risk for suffering a heart attack will usually experience this cardiovascular event when they are 60, on average, according to researchers.

"So the calculation of an individualized MI risk from those over 50 years old would seem to be appropriate," Villaplan-Velasco said. "This would enable doctors to suggest behaviors that could reduce risk, such as giving up smoking and maintaining normal cholesterol and blood pressure. Our work once more shows the importance of comprehensive analysis of data that is routinely collected and its value in the further development of personalized medicine."

Earlier this month, the American Heart Association announced another non-invasive test that could potentially determine a person’s risk of heart disease before they experience any symptoms.

The test is known as a coronary artery calcium (CAC) test. A CAT scan of a patient’s heart muscle will allow physicians to look for buildup of calcified plaque that can affect the flow of blood to the heart. The calcium is composed of cholesterol, fats, calcium and other substances in the blood and is different from the calcium in bones, according to the AHA.

The test involves a CT-scan of the chest that takes about ten minutes to perform and then a score representing the amount of plaque present is assigned to the patient. A higher CAC test score suggests you may be at a higher risk for future heart attack and have a higher chance of significant narrowing in the coronary arteries, according to health experts at the Cleveland Clinic. Depending on your score, your physician will determine the appropriate treatment for you that may include medication or a procedure.

Health experts said a CAC score of zero means you have no plaque in your arteries and are at low risk for a heart attack. A score from one to 100 is associated with a low to medium risk of a heart attack, and your doctor may recommend lifestyle changes and some other treatment. Scores ranging from 101 to 300 suggest that you may have plaque that is blocking an artery and your chance of having a heart attack is moderate to high, typically warranting further evaluation and treatment.

Scores over 300 suggest a large amount of plaque and your chance of heart attack is high. Your healthcare practitioner will likely want immediate follow-up testing and to start treatment at that level, according to health experts.

"A high calcium score correlates quite well with coronary heart disease. It’s not invasive and is a good screening test and sensitive," Dr. Ismail El-Hamamsy, MD, Ph.D., a Randall B. Griepp Professor of cardiovascular surgery and system director of aortic surgery at Mount Sinai Hospital in New York City, told Fox News during an interview.

The physician did caution that CAC testing may create anxiety with the potential for overdiagnosis and added, "There will be false positives but you push the investigation further to rule it out." El-Hamamsy said tests like a stress test, angiogram, among others, are often used to rule out coronary artery disease following certain CAC scores that indicate a patient may be at risk for disease.