STOCKHOLM - This year’s Nobel Prize in economic sciences has been awarded to the former chair of the U.S. Federal Reserve, Ben S. Bernanke, and two U.S.-based economists, Douglas W. Diamond and Philip H. Dybvig, "for research on banks and financial crises."

The prize was announced Monday by the Nobel panel at the Royal Swedish Academy of Sciences in Stockholm.

The committee said their work had shown in their research "why avoiding bank collapses is vital."

With their research in the early 1980s, the laureates laid the foundations for regulating financial markets and dealing with financial crises, the panel said.

Bernanke, 68, who is now with The Brookings Institution in Washington, D.C., examined the Great Depression of the 1930s, showing how dangerous bank runs — when panicked savers withdraw their deposits — can be.

Diamond, 68, based at the University of Chicago, and Dybvig, 67, who is at Washington University in St. Louis, showed how government guarantees on deposits can prevent a spiraling of financial crises.

"The laureates’ insights have improved our ability to avoid both serious crises and expensive bailouts," said Tore Ellingsen, chair of the Committee for the Prize in Economic Sciences.

Their research took on great real-world significance when investors sent the financial system into a panic during the fall of 2008. 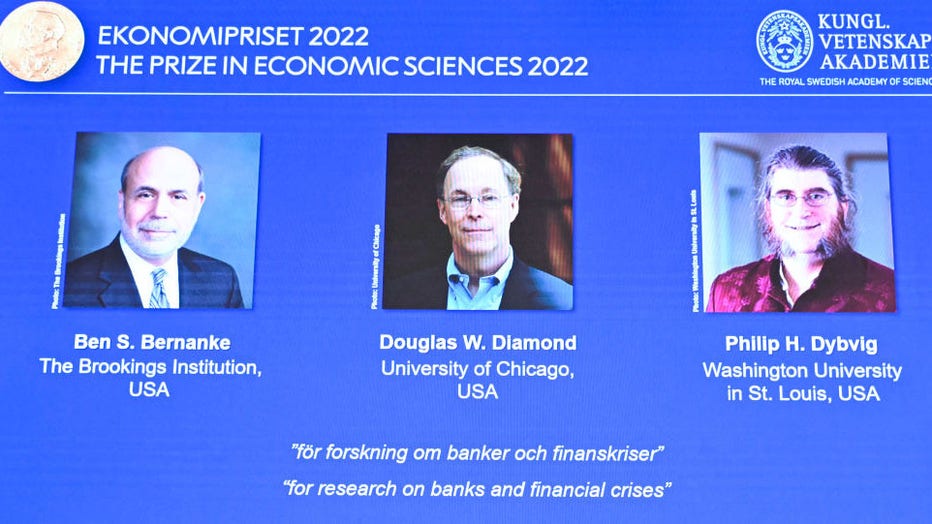 (L-R) 2022 Nobel Economics Prize laureates Ben Bernanke, Douglas Diamond and Philip Dybvig are seen on a display during a press conference to announce the winners of the 2022 Sveriges Riksbank Prize in Economic Sciences in Memory of Alfred Nobel at t

Bernanke, then head of the Fed, teamed up with the Treasury Department to prop up major banks and ease a shortage of credit, the lifeblood of the economy.

They also pushed long-term interest rates to historic lows and led to fierce criticism of Bernanke, particularly from some 2012 Republican presidential candidates, that the Fed was hurting the value of the dollar and running the risk of igniting inflation later.

The Fed’s actions under Bernanke extended the authority of the central bank into unprecedented territory. They weren’t able to prevent the longest and most painful recession since the 1930s. But in hindsight, the Fed’s moves were credited with rescuing the banking system and avoiding another depression.

Unlike the other prizes, the economics award wasn’t established in Alfred Nobel’s will of 1895 but by the Swedish central bank in his memory. The first winner was selected in 1969.

Last year, half of the award went to David Card for his research on how the minimum wage, immigration and education affect the labor market. The other half was shared by Joshua Angrist and Guido Imbens for proposing how to study issues that don't easily fit traditional scientific methods.

A week of Nobel Prize announcements kicked off Oct. 3 with Swedish scientist Svante Paabo receiving the award in medicine for unlocking secrets of Neanderthal DNA that provided key insights into our immune system.

Three scientists jointly won the prize in physics Tuesday. Frenchman Alain Aspect, American John F. Clauser and Austrian Anton Zeilinger had shown that tiny particles can retain a connection with each other even when separated, a phenomenon known as quantum entanglement, that can be used for specialized computing and to encrypt information.

The Nobel Prize in chemistry was awarded Wednesday to Americans Carolyn R. Bertozzi and K. Barry Sharpless, and Danish scientist Morten Meldal for developing a way of "snapping molecules together" that can be used to explore cells, map DNA and design drugs that can target diseases such as cancer more precisely.

French author Annie Ernaux won this year’s Nobel Prize in literature Thursday. The panel commended her for blending fiction and autobiography in books that fearlessly mine her experiences as a working-class woman to explore life in France since the 1940s.