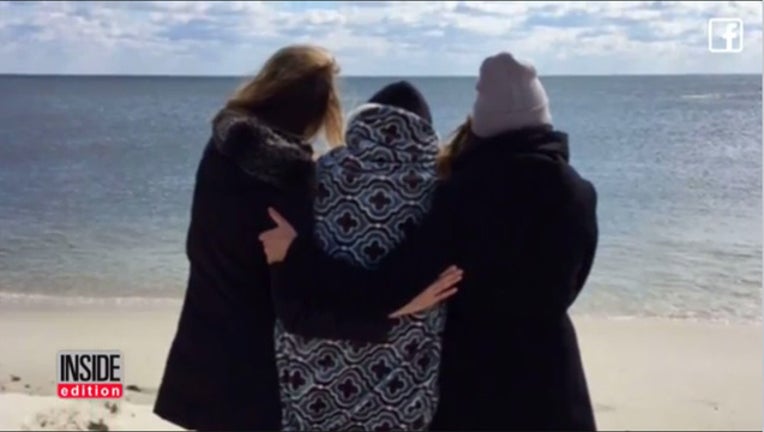 INSIDE EDITION - A New Jersey woman was able to fulfill her dying wish to see the ocean again after she was given only three to six months to live.

Patricia Kelly, 78, was diagnosed with AML Leukemia in December and soon after her family began planning one last weekend getaway at Ship Bottom in Long Beach Island, a place Kelly has visited for years.

“She’s been going there every year since she was a little girl and as she grew up she would rent beach houses every year and it became a tradition. She said she wanted to feel the sand in her feet one more time and to see the ocean,” Stephanie Corbin, Kelly’s daughter in law, told InsideEdition.com.

As the planned trip approached, however, Kelly’s body got much weaker and she was unable to walk far.

“I was like, 'How I am I going to make all these things work for her?' So I called police and explained the situation," Corbin said. "I got a phone call back saying they would be happy to help us. I made arrangements with them to pick her up."

Kelly, along with her some of her best friends, her daughters-in-law and her grandchildren, set out for the weekend earlier this month.

"We had 11 women spanning generations aged 28-78 years old come together to spend a final weekend at the beach. We laughed until we cried and cried until we laughed," Corbin said.

But, the highlight of the trip was when Officer Holloway from the Ship Bottom Police came to make Kelly’s wish come true.

“He gave her the ride of her life. She was beyond ecstatic to get back to the beach to have that one last hoorah and be there with all the women in her life that mean so much to her,” Corbin said.

Corbin said Kelly thought she would only be able to see the beach from the window, but Officer Holloway drove her right onto the sand.

The officer even joined in on the group’s prayer circle.

“He wrapped his arm around Pat, and in that moment gave her such comfort,” said Corbin.

“Take the time and make memories and be present in everyone's life that matters,” Corbin said.