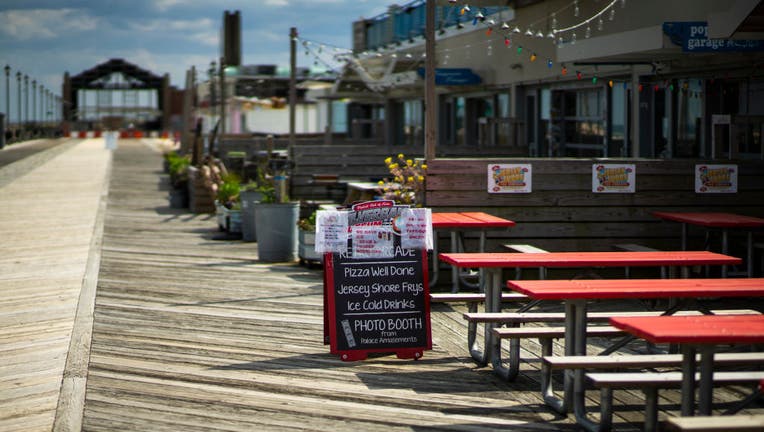 ASBURY PARK, NJ - MAY 4: Restaurants along the boardwalk in the Jersey Shore town. (Photo by Eduardo MunozAlvarez/VIEWpress/Corbis via Getty Images)

NEW JERSEY - The state of New Jersey will sue a shore town that has defied an executive order by authorizing indoor dining to begin on Monday.

Democratic Gov. Phil Murphy began his daily COVID-19 briefing on Friday by saying his administration had spoken with officials in Asbury Park but hadn’t resolved the issue.

As part of the second phase of the state's efforts to reopen its economy, Murphy has authorized outdoor dining and non-essential retail to resume on Monday. Asbury Park’s city council on Wednesday night approved a resolution permitting restaurants to host diners indoors on Monday, with some restrictions, in defiance of Murphy's executive order.

“We have one set of rules and they are based on one principle, and that is ensuring public health," Murphy said. "The attorney general will be bringing a lawsuit as we speak against Asbury Park to enforce our order.”

Asbury Park’s resolution would permit restaurants to host diners inside at 25% of the building’s capacity or 50 people, whichever is less.

Asbury Park Mayor John Moor said in an email Friday that he couldn't comment because he had not seen the lawsuit.

Murphy has not indicated when restaurants will be able to reopen for indoor seating, aside from saying he hoped it would be “sooner rather than later.”

Marilyn Schlossbach and Amy Russo say they will reopen on Monday with a limited capacity despite NJ Gov. Phil Murphy's executive order banning them from doing so.