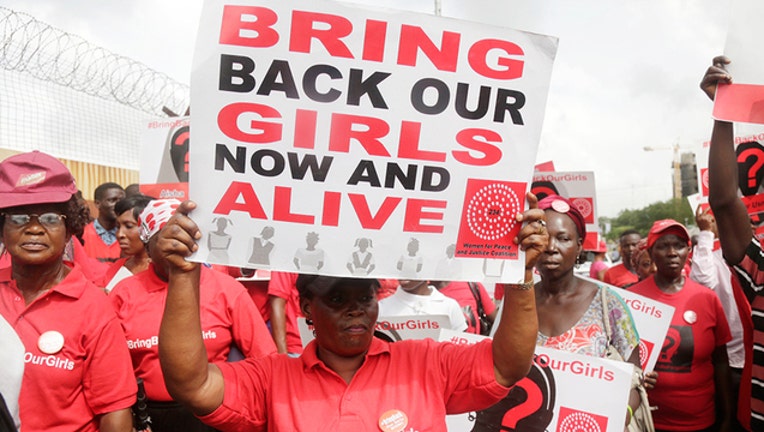 Bring back our girls campaigners chant slogans during a protest calling on the government to rescue the remaining kidnapped girls who were abducted almost three years ago, in Lagos, Nigeria April. 13, 2017. (AP Photo/ Sunday Alamba)

MAIDUGURI, Nigeria (AP) - Eighty-three Chibok schoolgirls kidnapped three years ago by Boko Haram extremists in northern Nigeria have been released into military custody, authorities said late Saturday. Family members said they were eagerly awaiting a list of names and "our hopes and expectations are high."

Before the announcement, 195 of the schoolgirls had remained captive after the first negotiated release of 21 girls in October. At the time, Nigeria's government said another group of 83 girls would be released "very soon."

A Nigerian military official with direct knowledge of the rescue operation said the 83 freed girls were found near the town of Banki in Borno state near Cameroon.

"The location of the girls kept changing since yesterday when the operation to rescue them commenced," said the official, who spoke on condition of anonymity because he was not authorized to make the announcement.

The number released could not be independently confirmed by The Associated Press, and there was no official government announcement late Saturday.

On Friday, the United States and Britain issued warnings that Boko Haram was actively planning to kidnap foreigners in an area of Borno state "along the Kumshe-Banki axis." That's close to where the Chibok girls were reported to be found.

The 276 schoolgirls kidnapped from Chibok in northern Nigeria in April 2014 are among thousands of people abducted by Boko Haram over the years. The mass abduction shocked the world and put tremendous pressure on Nigeria's government to counter the extremist group.

Many of the kidnapped girls, most of whom were Christians, were forced to marry the Islamic extremists and became pregnant. Human rights advocates believe others could be among the young girls who have been used to carry out suicide bombing attacks.

The group representing the families of the girls said they were awaiting direct confirmation from the government.

"Our hopes and expectations are high as we look forward to this news being true and confirmed," said Sesugh Akume with the #BringBackOurGirls campaign.

The Nigerian government has denied that a ransom was paid in the October release and that it freed some detained Boko Haram fighters in exchange for the girls. The negotiations were mediated by the Swiss government and the International Committee of the Red Cross.

At the three-year anniversary of the kidnapping in April, the government said the latest negotiations had "gone quite far" but faced challenges.

Buhari late last year announced Boko Haram had been "crushed," but the group continues to carry out attacks in northern Nigeria and neighboring countries. Its insurgency has killed more than 20,000 people and driven 2.6 million from their homes, with millions facing starvation.