Officials cut the ribbon on the UBS Arena at Belmont Park, which will become the new home of the New York Islanders.

NEW YORK - Mike Bossy, one of hockey’s most prolific goal-scorers and a star for the New York Islanders during their 1980s Stanley Cup dynasty, has died after a battle with lung cancer. He was 65.

TVA Sports, the French-language network in Canada where he worked as a hockey analyst, confirmed Bossy died Thursday night. An Islanders spokesman said Bossy was in his native Montreal, where the team will play Friday night against the Canadiens. 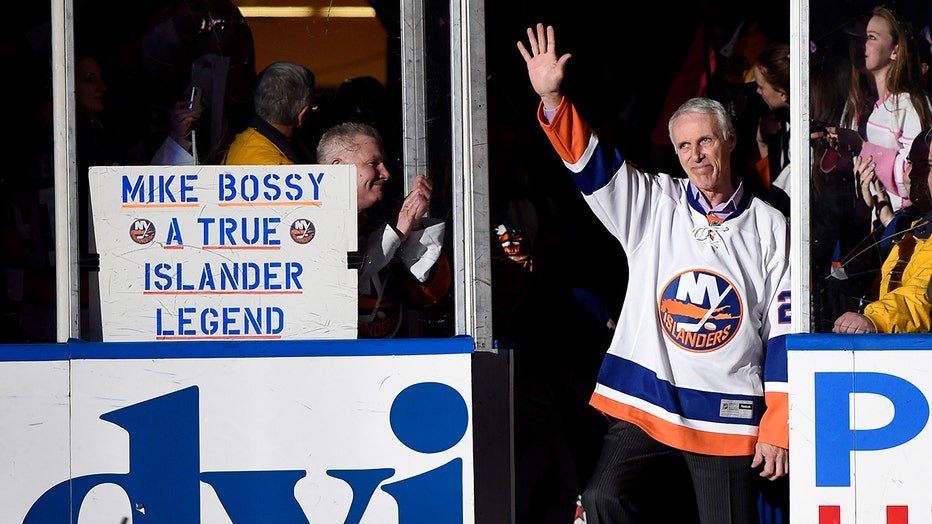 FILE - Hockey Hall of Famer and former New York Islander Mike Bossy waves to fans as he is introduced before the NHL hockey game between the Islanders and the Boston Bruins at Nassau Coliseum on Thursday, Jan. 29, 2015, in Uniondale, N.Y. (AP Photo/K

Bossy helped the Islanders win the Stanley Cup four straight years from 1980-83, earning the Conn Smythe Trophy as playoff MVP in 1982. He scored the Cup-winning goal in 1982 and ’83.

He revealed his diagnosis in October in a letter to TVA Sports.

"It is with a lot of sadness that I need to step away from your screens, for a necessary pause," Bossy wrote in French. "I intend to fight with all the determination and fire you’ve seen me show on the ice."

It’s the third loss from that Islanders era this year after fellow Hockey Hall of Famer Clark Gillies died in January and Jean Potvin died in March.

A 12-year-old hockey player from New Jersey is back on the ice after battling cancer, and he was able to beat the disease with the support of some of the sports' biggest stars.

Daughter Tanya Bossy said her father was "no longer in pain."

"My dad loved hockey, sure, but first and foremost he loved life," she said in a statement in French on behalf of the Bossy family. "Until the end of his journey, he hung on. He wanted to live more than anything."

Bossy was a first-round pick in 1977 and played his entire 10-year NHL career with New York. He won the Calder Trophy as rookie of the year, got the Lady Byng Trophy for gentlemanly conduct three times and led the league in goals twice.

Bossy scored 50 or more goals in each of his first nine seasons — the league’s longest streak. He and Wayne Gretzky are the only players in hockey history with nine 50-goal seasons.

"The New York Islanders organization mourns the loss of Mike Bossy, an icon not only on Long Island but the entire hockey world," Islanders president and general manager Lou Lamoriello said. "His drive to be the best every time he stepped on the ice was second to none. Along with his teammates, he helped win four straight Stanley Cup championships, shaping the history of this franchise forever."

Bossy is one of only five players to score 50 goals in 50 games. He remains the all-time leader in goals a game in the regular season at 0.762, and only two players have recorded more hat tricks than Bossy’s 39.

He ranks third in points a game and seventh on the all-time scoring list. Those are all in the regular season when Bossy put up some of the best numbers in the history of the game. In the playoffs, Bossy was even more clutch. He is the only player with four game-winners in the same playoff series and scored three playoff overtime goals.

Bossy was an eight-time All-Star and finished with 573 goals and 553 assists for 1,126 points in 752 regular-season games. He was the fastest player to reach the 100-goal mark and currently ranks 22nd on the career goals list. In the playoffs, Bossy had 160 points in 129 games.

Back and knee injuries ultimately ended his career in 1987. He was limited to 38 goals in 63 games and unable to return for an 11th season.

"Though containing him was the obsession of opposing coaches and checking him the focus of opposing players, Bossy’s brilliance was unstoppable and his production relentless throughout his entire career," Bettman said. "He thrilled fans like few others."

Before reaching the NHL, Bossy played five seasons in the Quebec Major Junior Hockey League with the Laval National. He had 602 points in 298 QMJHL games. Bossy also represented Canada at the Canada Cup in 1981 and 1984, long before NHL players began competing at the Winter Olympics.