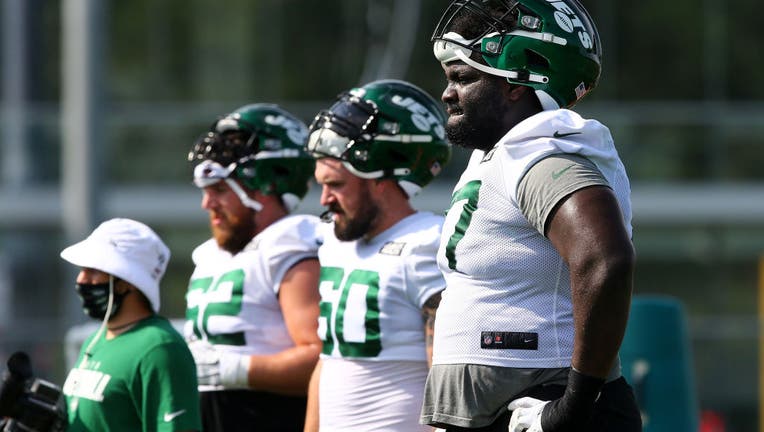 FLORHAM PARK, N.J. (AP) - Sam Darnold watched as several of his New York Jets teammates took turns speaking, many of whom got emotional.

And, the quarterback did what he thought was his best play at that moment.

“I took the time to understand it is different growing up Black in America,” Darnold said Saturday. “And I now understand that better.”

Darnold recalled how his parents always harped on him returning home before dark in Southern California so he didn't get lost. He heard another not-so-sugarcoated side of that same curfew rule from his teammates.

“They were told, 'Hey, make sure you’re home before dark or else something bad can happen,'” Darnold said. “That's a different conversation than what my parents had with me.”

The Jets were one of nine NFL teams that canceled practice Thursday in wake of the police shooting of Jacob Blake, a Black man, in Wisconsin last Sunday. Instead of taking the field, the entire team spent more than four hours talking about racial injustice and social issues.

The conversations — which included team president and CEO Christopher Johnson, general manager Joe Douglas and coach Adam Gase — were led by players detailing their experiences with racism, inequality and police brutality. They continued their discussions Friday, an off day, to begin devising plans to effect change among each other and in the community.

“One of the guys in the room was like, ‘In order for us to help, we have to realize that this is a snowball and not an avalanche,’” said offensive lineman Jonotthan Harrison, who is Black. “We can't just jump off the deep end and be like, attack this and do this and do this. No, we have to be very methodical and we have to approach it the right way, the safest way.”

Many teams around the league have had similar conversations — with topics ranging from equal rights to making sure players are registered to vote — in the days since Blake, 29, was left paralyzed after being shot in the back by a police officer.

The Seattle Seahawks canceled their scheduled practice Saturday after a lengthy team meeting. Coach Pete Carroll spoke to reporters later in the day for more than 14 minutes, without taking questions.

Blake's shooting was captured on cellphone video and ignited new protests in the U.S. three months after the death of George Floyd under the knee of a Minneapolis police officer touched off a nationwide reckoning over racial injustice — and discussions among NFL players and staffs about equality.

“A lot of our players, a lot of our Black players, are hurting from the standpoint of this is close to home for many of them,” said Philadelphia Eagles coach Doug Pederson, who is white. “So for me, it’s about understanding, it’s about learning, it’s about gaining knowledge, and then being able to support our guys.”

Bengals players, coaches, ownership and staff marched together in Cincinnati from Paul Brown Stadium to the National Underground Railroad Freedom Center on Saturday.

“Together, as a unified front, we must identify, address and ultimately end those practices and policies that would deny liberty and justice to all, regardless of race, religion, or creed,” the Bengals said in a statement. "It is time for us all to take a stand! It is each of our responsibility to effect change in our communities, not only for us but for those yet to come.

“We cannot turn a blind eye to the racism still experienced in this country.”

Tomlin, one of three Black NFL head coaches, is the third-longest tenured coach in the league. Players and staff followed Tomlin’s speech by kneeling in prayer around the 50-yard line.

“We decided to come together, lock arms and make a stand to show compassion,” linebacker Vince Williams said Saturday. “Even though we’re professional athletes, we’re still sympathetic to everything going on.”

Darnold said he and his Jets teammates have not talked about sitting out any games as a form of protest, something that has happened the past several days in other sports such as the NBA, WNBA, NHL, MLS and Major League Baseball.

Green Bay Packers center Corey Linsley, who is white, said it was eye-opening to listen to some of his teammates' experiences — particularly offensive lineman Billy Turner and linebacker Christian Kirksey, both of whom are Black.

“To hear their stories and especially know the place that they’re coming from, it’s impactful, man,” Linsley said Saturday. “It hits you different, for sure. It’s made an impact on me.