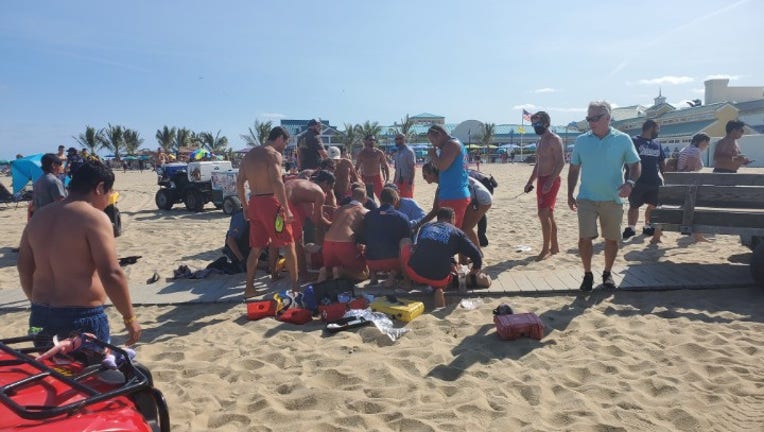 NEW YORK - A Newark teen was charged with attempted murder and weapons offense Tuesday in connection with the stabbing of two people at Point Pleasant Beach, the Ocean County Prosecutor's Office announced Tuesday.

The police department said officers responded to a call for a fight at Jenkinson's Beach at about 3:30 p.m. Monday and found two men with stab wounds. They were taken Jersey Shore Medical Center in Neptune and remained in serious but stable condition.

The police department said it had two men in custody, but upon further investigation determined only one suspect had been involved in the stabbing.

Citing the youth's age, authorities declined to release the teen's name or gender. He was being held in a juvenile detention facility pending an initial court appearance.

Point Pleasant Beach Mayor Paul Kinetra took to Facebook to laud the arrests by his officers.

"The Chief of Police will be issuing a statement on the incident at Jenkinsons Beach later this evening. Thanks to the quick and heroic work of our brave officers, the suspect is now in custody and there is no further threat to the public. Thank you as well to the lifeguards and first aid teams that responded equally as quickly.

Considering the tragic events of the past hour, I certainly hope Jenkinsons will finally see the light and drop their counterproductive lawsuit that undermines our ability to protect residents and visitors alike. We should be working together as one on this front. This cannot stand in Point Pleasant Beach."

Jenkinson's filed a lawsuit against the town saying it did not have the authority to prohibit people 21 years old and over from drinking on the beach because the beach is private property.