The state's Board of Elections voted to cancel the presidential primary. New York will still hold its congressional and state-level primaries on June 23.

NEW YORK - In an unprecedented move, New York has canceled its Democratic presidential primary that was scheduled for June 23 amid the coronavirus pandemic.

The Democratic members of the State's Board of Elections voted Monday to nix the primary. New York will still hold its congressional and state-level primaries on June 23.

Commissioner Andrew Spano said he had pondered at length, reaching a decision just Monday morning. He said he worried about potentially forcing voters and poll workers to choose between their democratic duty and their health. While there will still be other offices on the ballot, Spano reasoned it made sense to give voters an opportunity to choose in contested races but not to “have anyone on the ballot just for the purposes of issues at a convention.”

New York Democratic Party chair Jay Jacobs has said that the cancellation of the state’s presidential primary would mean a lower expected turnout and a reduced need for polling places.

“It just makes so much sense given the extraordinary nature of the challenge,” Jacobs said last week. 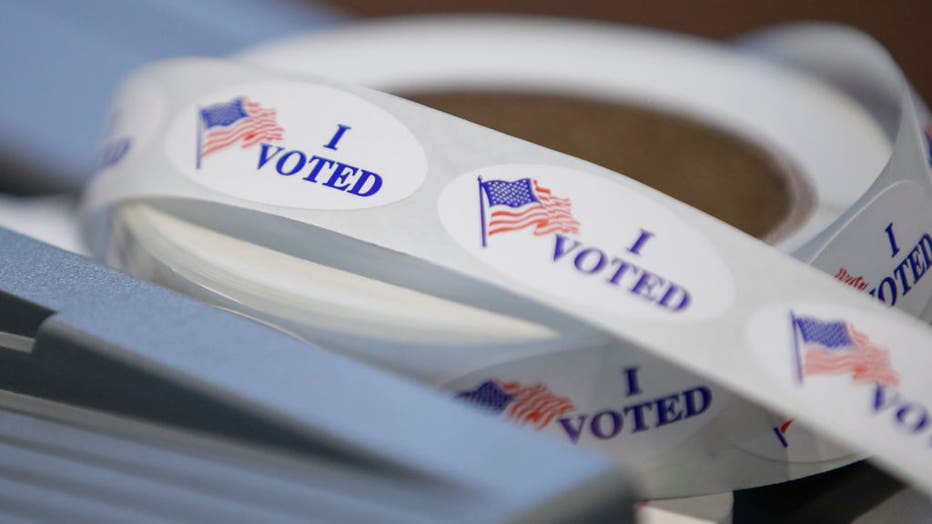 I voted stickers sit on a table. (Photo by KAMIL KRZACZYNSKI/AFP via Getty Images)

Local election officials and voting groups have called on the state to use federal funds to purchase cleaning supplies and protective gear, and boost staff ahead of 2020 elections.

Both the state’s Democratic Party and Gov. Andrew Cuomo have said they didn’t ask election commissioners to make the change, which is allowed thanks to a little-known provision in the recently passed state budget that allows the New York board of elections to remove names of any candidates who have suspended or terminated their campaign from the ballot.

The decision to cancel a Democratic primary is left up to Democratic state election commissioners.

Former Democratic presidential candidate and U.S. Senator Bernie Sanders announced earlier this month that he had suspended his campaign.In a Sunday letter, a lawyer for the Sanders campaign asked the commissioners not to cancel the primary.

“Senator Sanders has collaborated with state parties, the national party and the Biden campaign, to strengthen the Democrats by aligning the party’s progressive and moderate wings. His removal from the ballot would hamper those efforts, to the detriment of the party in the general election,” the lawyer, Malcolm Seymour, wrote in a letter obtained by The Wall Street Journal.

Board Co-Chairman Douglas Kellner said the primary cancellation was a “very difficult decision," but noted state law allows for removing candidates from the ballot when they have suspended their campaigns, as Sanders has done and, further, endorsed presumptive nominee Joe Biden.

“That has effectively ended the real contest for the presidential nomination," Kellner said. "And what the Sanders supporters want is essentially a beauty contest that, given the situation with the public health emergency that exists now, seems to be unnecessary and, indeed, frivolous.”

New York voters can now choose to vote with an absentee ballot in the June primaries under a Cuomo executive order that adds the risk of acquiring COVID-19 as a reason to vote absentee. Cuomo also recently announced the state is sending mail-in ballots to voters.

Here are the latest coronavirus-related developments in New York:

Stay-at-home restrictions could be eased in mid-May for parts of New York state where the coronavirus outbreak is less severe, Cuomo said Monday.

Cuomo outlined re-opening parameters as hospitalization rates and deaths continue to decline from peaks earlier this month. The 337 deaths recorded statewide Sunday was the lowest daily tally this month and down from a high of 799 on April 8. More than 17,000 people have died in New York since the start of the outbreak.

Cuomo said at his daily news briefing that statewide restrictions set to expire May 15 will likely be extended in many parts of the state.

“But in some parts of the state, some regions, you could make the case that we should un-pause on May 15,” said Cuomo, who likened it to turning a valve a bit at a time.

Preliminary results of antibody tests, which check for substances the immune system makes to fight the virus, suggest the coronavirus is far less prevalent in some upstate areas compared New York City, a pandemic hotspot.

While almost a quarter of people in New York City tested positive, the rate was below 2% in northern and central New York, according to preliminary estimates.

He said the “self-swab” tests would allow for more and easier testing and make it safer for test-seekers and health care workers alike.

“This is something we’re going to start using aggressively because it will be better for everyone,” the Democrat said.

Up to this point, testing has mainly been done by health care workers inserting a swab deep into a person's nostrils. The feeling often makes someone sneeze or cough while the health care professional is right there, city Health and Hospitals President Dr. Mitchell Katz said.

The new method is set to start within the next few days at eight community testing sites around the city. The process will work like this: A health care worker will explain how to administer the test, and then the person would take a nasal swab, with a health professional watching via a mirror to offer guidance, Katz said. The person getting tested then will spit into a cup for a second sample for cross-checking. The samples will then be given to a health care worker and tested.

So far, more than 5,000 people have been tested at the city-run community sites since April 17.

The new coronavirus causes mild or moderate symptoms for most people. For some, especially older adults and people with existing health problems, it can cause more severe illness or death.