While many Americans associate New Year’s with caviar, champagne and noisemakers, many people around the world celebrate the holiday with "lucky" dishes traditionally eaten to bring good fortune in the coming year.

But depending on where you live, the food on your plate may vary.

Here is a history of some notable New Years Eve and New Year’s Day food traditions around the world and what they symbolize:

Southerners will probably be familiar with this New Year’s Day menu.

Black-eyed peas, collard greens and cornbread served on the holiday is a tradition that is not only popular in the South, but all over the nation. The saying, "peas for pennies, greens for dollars, and cornbread for gold," is associated with the foods, according to AllRecipes.com.

Black-eyed peas are also associated with a "mystical and mythical power to bring good luck," according to John Egerton, a Southern food researcher in his book "Southern Food: At Home, On the Road, In History," the food outlet reported.

The green color of the collard greens represents money and the yellow color of cornbread represents gold for a prosperous new year.

This is a menu staple in the Southern U.S., which usually consists of black-eyed peas, rice and pork. It originated with enslaved Africans brought to the U.S. in the 19th century, food historian and cookbook author John Martin Taylor told the Washington Post.

"In the American South, with both rice and black-eyed peas available, the natives of West Africa could prepare a dish that reminded them of home: a humble combination of rice and beans that eventually became known as hoppin’ John," the outlet reported. 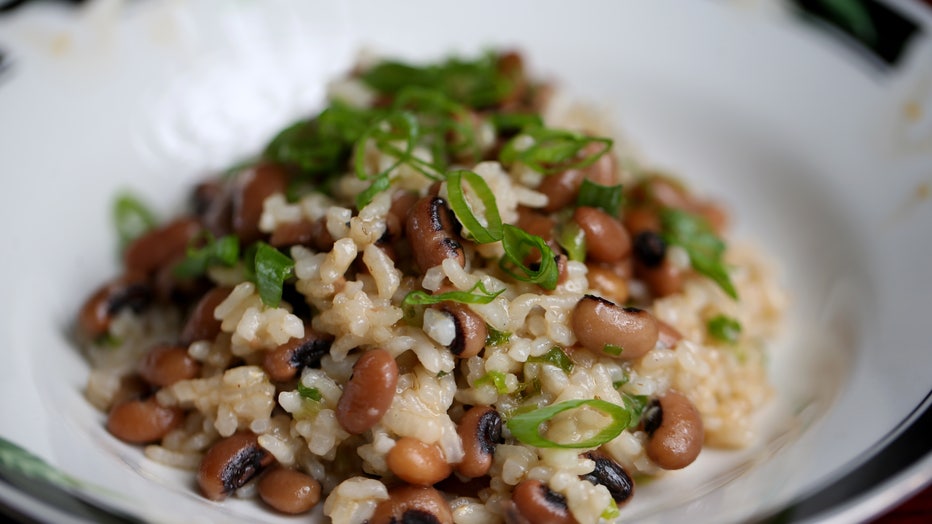 While it remains unclear among historians exactly how the dish came to symbolize good luck, some believe it might have started during the period between Christmas and New Year’s Day, when enslaved Africans were given rare time off from harvesting and planting.

Taylor told the outlet that this was a good time to give thanks for past crops and raise expectations for the coming season. Such a ritual may have developed into a good-luck tradition, with hoppin’ John serving as the centerpiece.

Often served with collard greens and cornbread, some food historians think the origin of the dish’s unusual name came from "pois pigeons," which is French for dried peas and pronounced "paw-peejohn." This may have sounded like "hoppin' John" to English speakers, according to History.com.

At the stroke of midnight, you may find Italians eating dishes of lentils as part of multiple courses each year to ring in the new year.

"Lentils, or lenticchie, are believed to bring good luck in Italy and eating them at New Year's – shortly after midnight – is a tradition that’s said to date back to ancient Rome," according to The Local, an English-language news network in Europe.
Ancient Romans would give a pouch full of lentils — which are round and coin-shaped — as a gift to wish friends luck and prosperity in the new year, the outlet reports.

The tradition was eventually brought to the U.S. in the 16th century by the Portuguese and Spanish, History.com notes.

Head to parts of Pennsylvania, Ohio and other nearby regions, and you’ll find that many enjoy pork and sauerkraut on New Year’s Day. 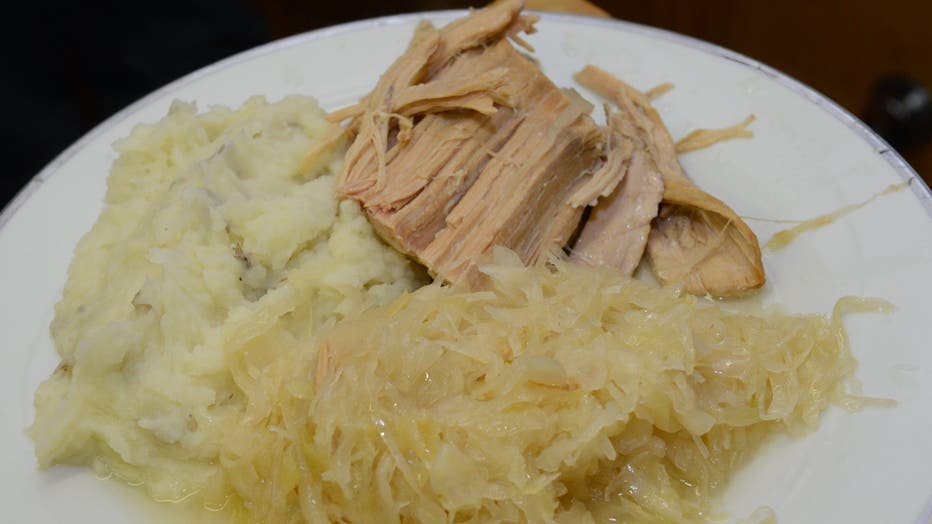 The dish is said to bring good luck and progress because pigs are known to root forward — or move ahead, according to History.com. Sauerkraut is made with cabbage, which is linked to symbolic riches, prosperity and long life due to its long strands.

The history website says this dish was a Germanic tradition was brought to America by the Pennsylvania Dutch.
"Fresh pork was the star of Christmas and New Year's meals for early settlers because of its timing with winter hog butchering, and sauerkraut was served as a side dish because winter was also cabbage harvesting season," it says.

Ringing in the year with toshikoshi soba, a soup with buckwheat "year-crossing noodles," is meant to symbolize moving from one year into the next with good wishes ahead.

The dish is a longtime New Year's Eve tradition in Japan and is now practiced in many parts of the world, including the U.S.
The word toshikoshi means "to climb or jump from the old year to the new," according to The Japan Times. The long, thin noodles represent a long, healthy life and date back to the 13th or 14th century, "when either a temple or a wealthy lord decided to treat the hungry populace to soba noodles on the last day of the year."

King cake is that delicious doughnut-like dessert famous in New Orleans and during Mardi Gras, and eating it signifies you’re satisfied with the end of the Christmas holiday season and ready for a new year.

RELATED: Beyond Dry January: The rise of non-alcoholic drinks in the adult beverage market

If you’re lucky enough to get served the slice with a gold coin or a tiny plastic baby, you’ll have an especially wealthy and prosperous new year. In other words, eating this cake could make you lucky. Do it.

Tamales, which are bundles of masa stuffed with meats and cheeses, wrapped in corn husks and steamed, have come to represent a staple throughout the holiday season for many in Mexico, Central America, South America and the southwestern U.S.

In Mexico, this food dish is enjoyed from Dec. 12, the Feast of Our Lady of Guadalupe, to Jan. 6, Three Kings' Day, according to History.com. Tamales date back to Mesoamerican culture, as early as 8000 to 5000 BC.
And tamales symbolize much more than food.

"They bring the entire family together. It is part art, part hard work, part repetitive labor but all family bonding," explains Bashas, a family-owned grocery store chain based in Arizona. "This is a very special time that brings generations together, an event families look forward to each year, making it a joyous and meaningful gathering special."

In Spain and parts of Latin America, a tradition of scarfing down 12 grapes at the stroke of midnight — one for each chime of the clock — will bring good luck in the coming year, according to History.com.

Some trace the tradition of the 12 lucky grapes, or uvas de la suerte, to grape farmers in Alicante, Spain, who suggested the idea when they had a surplus harvest to unload in the early 1900s, Atlas Obscura reports.

However, newspaper articles about the tradition from the 1880s suggest it also may have developed from Madrid’s bourgeoisie copying the French custom of drinking champagne and eating grapes on New Year’s Eve, according to food writer Jeff Koehler.

But avoid lobster and chicken

As delicious as they are, it is also suggested you should not eat certain things on New Year’s Eve, in order to prevent bad luck for the year ahead, such as lobster and chicken.

The thinking is since lobsters can move backwards, eating them before the stroke of midnight may cause setbacks in the new year. For chickens, the idea is similar as they can scratch backwards, and since they can fly, your luck could fly away.

This story was reported from Los Angeles and Cincinnati.