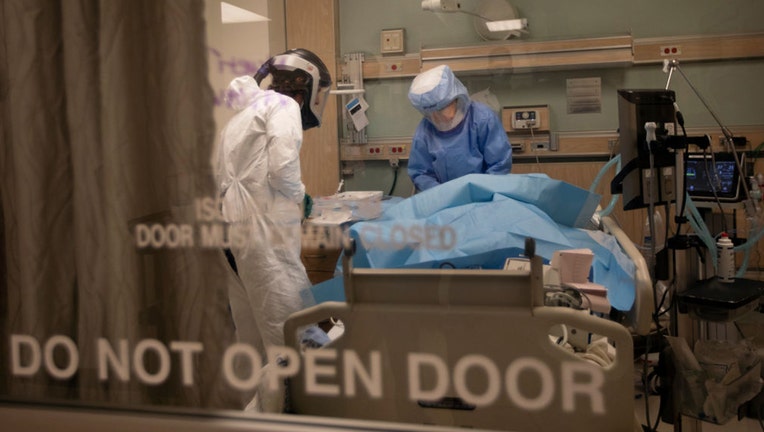 Kentucky and Texas joined a growing list of states that are seeing record numbers of hospitalized COVID-19 patients in a surge that is overwhelming doctors and nurses and afflicting more children.

Intensive care units around the nation are packed with patients extremely ill with the coronavirus — even in places where hospitalizations have not yet reached earlier peaks.

The ICU units at Phoebe Putney Memorial Hospital in Georgia typically have room for 38 patients, and doctors and nurses may have only two or three people who are very sick, said Dr. Jyotir Mehta, medical director of the ICU. On Wednesday, the ICU had 50 COVID-19 patients alone, roughly half of them relying on ventilators to breathe.

"I don’t think we have experienced this much critical illness in folks, so many people sick at the same time," Mehta said.

He said talking to family members is difficult. "They are grasping for every hope and you’re trying to tell them, ’Look, it’s bad,'" he said. "You have to tell them that your loved one is not going to make it."

In New Mexico, top health officials warned Wednesday that the state is about a week away from rationing health care. The number of coronavirus patients needing care at hospitals jumped more than 20% in a day.

"We’re going to have to choose who gets care and who doesn’t get care," state Health and Human Services Secretary Dr. David Scrase warned. "And we don’t want to get to that point."

Texas and Kentucky on Wednesday reported more COVID-19 patients in their hospitals than at any other time since the pandemic began. At least six other states — Arkansas, Florida, Louisiana, Hawaii, Mississippi and Oregon — have already broken their hospitalization records.

In Texas, nearly 47% of the population is fully vaccinated — below the national average of almost 52% — and Republican Gov. Greg Abbott has banned mask and vaccine mandates. Many counties and school districts have defied his mask ban.

In Kentucky, just under 48% of the population is fully vaccinated, and public health officials have blamed the lag in part for the state's surge. Democratic Gov. Andy Beshear's COVID-19 restrictions expired in June, and the GOP-controlled legislature has blocked him from issuing new mask requirements or capacity limits.

AM I IN A HIGH-RISK AREA FOR DELTA VARIANT?

WHAT ARE BREAKTHROUGH CASES?

DELTA VARIANT MAY CAUSE STEEP INCREASE IN CASES

Nationwide, COVID-19 deaths are running at more than 1,100 a day, the highest level since mid-March, and new cases per day are averaging over 152,000, turning the clock back to the end of January. As of early this week, the number of people in the hospital with the coronavirus was around 85,000, a level not seen since early February.

The surge is largely fueled by the highly contagious delta variant among people who are unvaccinated. In areas where vaccination rates are particularly low, doctors have pleaded with their communities to get inoculated to spare overburdened hospitals.

They have also sounded the alarm about the growing toll of the variant on children and young adults.

Children now make up 36% of Tennessee’s reported COVID-19 cases, marking yet another sobering milestone in the state’s battle against the virus, Health Commissioner Lisa Piercey said Wednesday. She said the state had 14,000 pediatric cases in the last seven days — a 57% increase over the previous week.

In South Carolina, students will again be required to wear masks on school buses starting Monday as COVID-19 cases among children and students rise rapidly.

Nearly 30% of new cases in South Carolina in the past two weeks have been in people 20 and under. During the same time in 2020, about 17% of cases were in children and teens, according to state officials.

Anderson Lopez Castillo, a nurse who cares for seriously ill COVID-19 patients at UAB Hospital in Birmingham, Alabama, said treating people as young as 16 in critical care has become an additional strain on top of a nearly yearlong ordeal that left him questioning his choice of a profession.

"Initially we saw a lot of older people getting it. It was like, ‘OK, we can tackle this. Even if it is stressful, even if it’s a dangerous virus, it’ll probably not be that bad on us as nurses taking care of these older patients,’" he said.

Castillo, 24, said he now sees the virus making young people very sick, and it makes him and other young nurses think of their own mortality.

"There’s definitely a little subconscious thought in the back of all of our heads going, ‘You know, that could be us,'’’ he said.

This story has been corrected to reflect that nearly 47% of Texas' population is fully vaccinated, below the national average.

Associated Press reporters around the country contributed to this report.