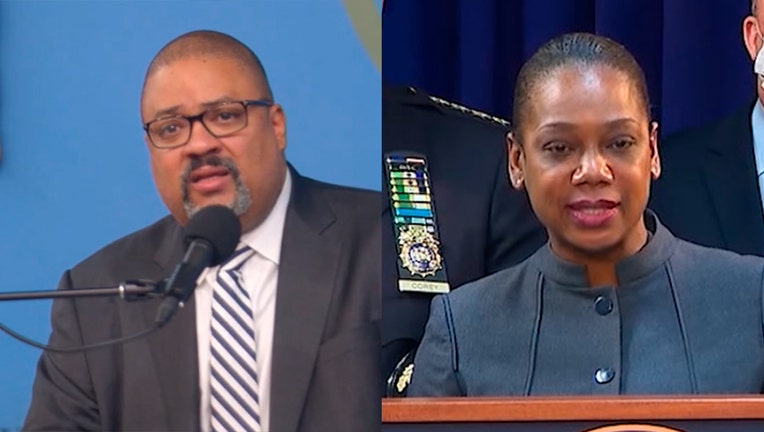 NEW YORK - A man who was accused of robbing a Duane Reade on the Lower East Side with a knife had his charge reduced to a misdemeanor by the Manhattan district attorney, according to court documents. William Rolon, armed with a pocketknife, allegedly stole over $2,000 worth of goods and cold medicine from the store. The manager of the Duane Reade told police she was terrified at the time. Police say this was the second time Rolon robbed the store and was his 39th arrest. But charges were reduced to petit larceny, a misdemeanor.

Critics say this change stems from an internal memo released at the beginning of the year by the new Manhattan District Attorney Alvin Bragg, who told prosecutors that they should try to reduce charges and instead seek diversion and treatment programs in many cases where no one is injured.

This move created an immediate pushback from certain lawmakers and even new NYPD Commissioner Keechant Sewell who said she was "very concerned" about the impact of this directive.

Francisco Marte, the head of the Bodega and Small Business Association in New York City, said this new policy has him concerned about the safety of his employees.

"The supermarket, they have been having a huge problem with shoplifting," Marte said. "Nobody can stop them because they feel that no one will prosecute them. So this is a huge safety problem."

The Legal Aid Society, which is representing Rolon, sent a statement.

"Mr. Rolon is a prime example of a person in need of treatment and resources, not incarceration," the Legal Aid Society said. "Jail and prison only create a vicious cycle of incarceration and only serve to exacerbate root cause issues and to detract from public safety."

However, this comes after a separate robbery at a TJ Maxx on Jan. 7, in which prosecutors also reduced the charges against the suspect, who allegedly threatened workers with scissors, to a shoplifting-type misdemeanor charge.

The Detectives' Endowment Association, the union that represents detectives in the NYPD, sent a letter on Wednesday to Gov. Kathy Hochul asking her to appoint "a special prosecutor to oversee actions of Manhattan District Attorney Alvin Bragg."

"The message D.A. Bragg has been sending to the criminal element has also been loud and clear: Bragg is green-lighting certain felony crimes, not to mention lesser, quality of life crimes, offering no consequences for the perpetrators at all," the letter stated.

Marte said he encourages Bragg to meet with local business owners and hear their concerns over this new policy.

Duane Reade officials declined to speak on the incident that occurred on Saturday but said they are cooperating with authorities.

The Manhattan District Attorney's Office did not return a request for comment.

Joint Statement by the NYPD and the Office of the Manhattan District Attorney, Jan. 11, 2022

Today, Manhattan District Attorney Alvin Bragg and Police Commissioner Keechant Sewell, and senior staff members met to discuss issues of mutual concern. The discussion was open, candid and productive. The meeting was to share ideas and examine policy differences that could be clarified and harmonized toward a common vision that acknowledges the need for criminal justice reform and alternatives to incarceration. It was agreed that police and prosecutors would weigh the individual facts and circumstances of each case with a view toward justice and work together to keep New Yorkers safe. These collaborative discussions will continue.