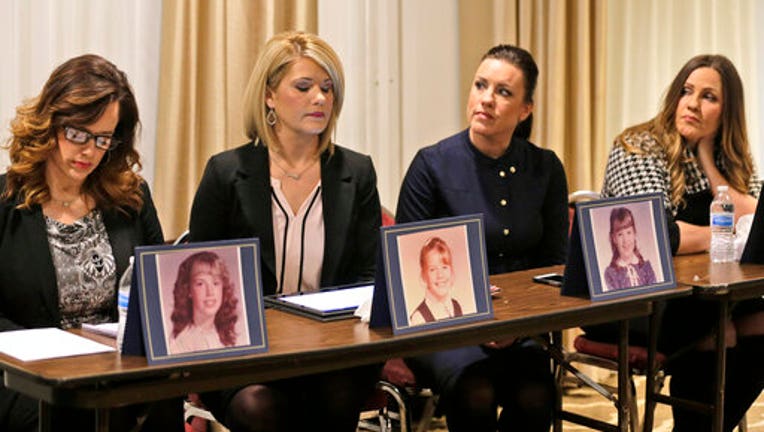 Sisters Patty Fortney-Julius, Lara Fortney McKeever, second from left, Teresa Forteny-Miller, second from right, and Carolyn Fortney sit behind pictures of themselves as children as they listen to an attorney speak to reporters during a news conferen

TRENTON, N.J. (AP) — New Jersey's Roman Catholic dioceses have given a two-week extension to childhood victims of sexual assault considering filing for compensation from a fund the church set up, the account's co-administrator said Friday.

Camille Biros, the co-administrator of the fund covering all five dioceses, including the Archdiocese of Newark, said in a phone interview that so far more than $10 million in 81 different cases has been paid out. The previous deadline for submissions to be filed with the fund was Feb. 15. It is now Feb. 29.

This is the second time the deadline had been extended.

Biros said the reason for the extensions was simple.

“We just wanted to extend it to get as many people into the program,” she said.

According to Biros, 593 claims have been filed are are being reviewed. Eight were deemed not eligible for a variety of reasons, including that the clergy were either not diocesan priests or the victim was not a minor, she said.

The fund does not cover abuses by religious order priests, such as Jesuits, who may serve in parishes or schools but are not ordained by the diocese.

Similar funds have been set up in New York, Pennsylvania, California and Colorado.

Victims in New Jersey have a couple of options because of a new law that went into effect Dec. 1, expanding the civil statute of limitations to make it easier for childhood abuse victims to sue. They can sue or seek compensation from the fund, but victims who accept money from the fund give up their right to sue.

The fund came after word in 2018 that New Jersey’s attorney general was leading a criminal investigation into clergy sexual abuse.

That investigation came after a grand jury probe in Pennsylvania that found more than 1,000 children had been abused by about 300 priests over a span of decades.

In addition to the Newark archdiocese, the Catholic dioceses of Camden, Metuchen, Paterson and Trenton are participating in the fund.