LAKE BUENA VISTA, Fla. - The NBA playoffs will resume Saturday, Aug. 29, after the league said it would agree to establish a social justice coalition aimed at social and racial equality and justice.

In a joint statement released Friday, the league explained that the new coalition would be made up of players, coaches and owners that will focus on issues such as voting access and advocating for meaningful police and criminal justice reform.

The statement added that league franchise owners will continue to work with local election officials to make their stadiums and arenas available as voting centers for the upcoming November election.

The league said that NBA officials and local authorities will ensure that the voting locations will “allow for a safe in-person voting option for communities vulnerable to COVID.”

“If a deadline has passed, team governors will work with local elections officials to find another election-related use for the facility, including but not limited to voter registration and ballot receiving boards,” according to the statement.

The league says it will also allow players and network partners to develop advertising spots in each upcoming NBA playoff game focused on promoting “greater civic engagement in national and local elections” while raising awareness around voter access and opportunity for residents of the team’s locations. 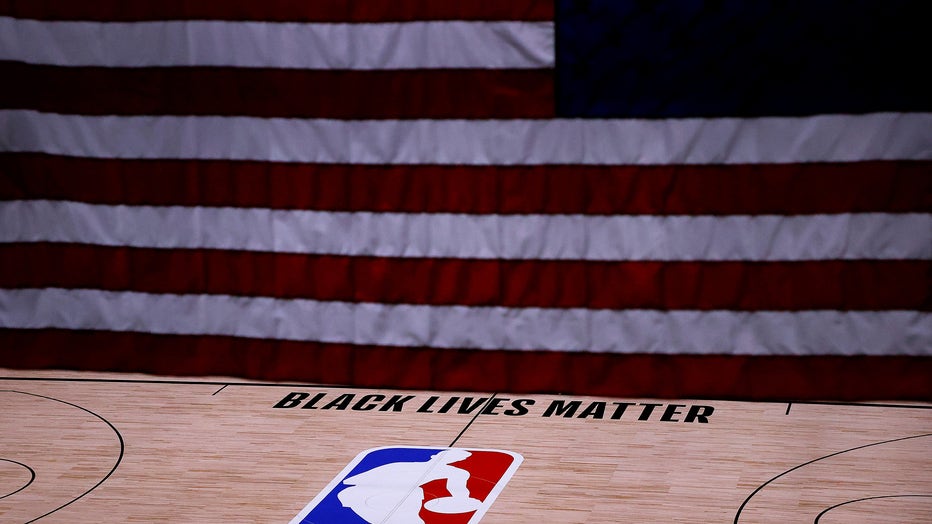 The Black Lives Matter logo is seen on an empty court as all NBA playoff games were postponed during the 2020 NBA Playoffs at The Field House at ESPN Wide World Of Sports Complex on August 27, 2020 in Lake Buena Vista, Florida. (Photo by Kevin C. Cox/Getty Images)

The creation of a social justice coalition within the NBA is the result of a historic protest by players within the league, first initiated by the Milwaukee Bucks who did not take the court for their playoff game on Aug. 26, against the Orlando Magic in response to the police shooting of Jacob Blake in Wisconsin.

Games were postponed the last two days before a meeting between owners and players Thursday in which an agreement to resume was reached.

Other leagues immediately followed suit, including the WNBA, the NHL, MLB and MLS, in which players refused to play, calling for police and criminal justice reform while expressing anger and frustration over racial injustice in the U.S.

“These commitments follow months of close collaboration around designing a safe and healthy environment to restart the NBA season, providing a platform to promote social justice, as well as creating an NBA Foundation focused on economic empowerment in the Black community," the statement read.

“We look forward to the resumption of the playoffs and continuing to work together – in Orlando and in all NBA team markets – to push for meaningful and sustainable change.”