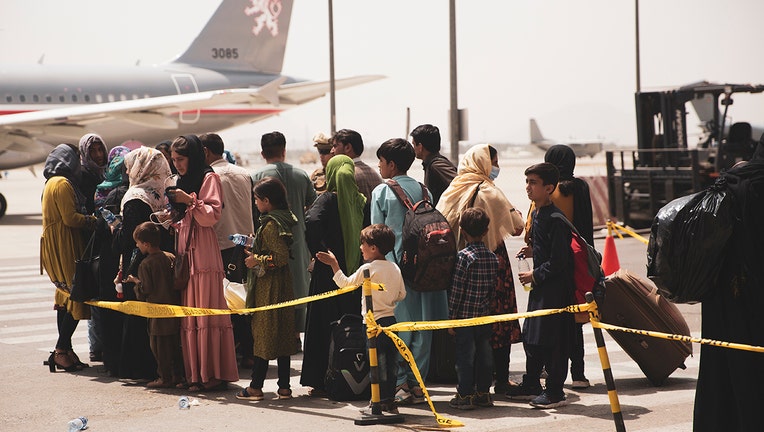 BRUSSELS (AP) - NATO foreign ministers committed Friday to focus on ensuring the safe evacuation from Afghanistan of their citizens and of Afghans deemed at risk after the Taliban takeover, centering on improving operations at Kabul airport first.

Faced with continuing chaos in the capital and the exit roads, many of the 30 allied nations raised "the need to work harder on how we can get more people ... into the airport, then processed and then onto the planes," NATO Secretary General Jens Stoltenberg said.

He called that "the big, big, big challenge."

All too often over the past hours and days, planes from NATO nations have been able to get to Kabul, only to be forced to leave empty or near-empty.

Belgium, for example, sent two big C-130 planes into Kabul, but of some 500 people who had been called up to board, only "some 20 were lucky enough" to get on the first plane, foreign minister Sophie Wilmes said. A second plane had to return to neighboring Pakistan empty, since designated passengers could not enter the airport.

"There are Taliban controls and U.S. controls which are very strict," said Wilmes.

She joined several other allies to call on the United States to secure Kabul airport for as long as it takes, even if that stretches beyond the evacuation of all U.S. nationals.

A NATO statement Friday said that "as long as evacuation operations continue, we will maintain our close operational cooperation through Allied military means" at the airport.

"They (the United States) have assured us that they won't withdraw from the airport until the last person requiring evacuation is out," she told Spanish public radio RNE.

RELATED: Biden vows to get all Americans home amid chaotic Afghanistan evacuation

Stoltenberg also insisted that the Taliban have to give free passage to any Afghan wanting to leave the country.

Beyond the immediate challenge, the NATO foreign ministers insisted that the new rulers in Kabul would have to make sure that the nation does not revert to being a center for terrorism.

"We will not allow terrorists to threaten us again from Afghanistan," Stoltenberg, reminding that NATO's engagement in the nation was based on the 9/11 attacks on the U.S. in 2001.

NATO headquarters has blamed a failure of Afghan leadership for the swift collapse of the country's Western-backed armed forces.

A year ago, NATO's "Resolute Support Mission" to train Afghan security forces involved around 10,000 personnel from 36 member and partner countries. Last Sunday, there were no troops under NATO command in Afghanistan.