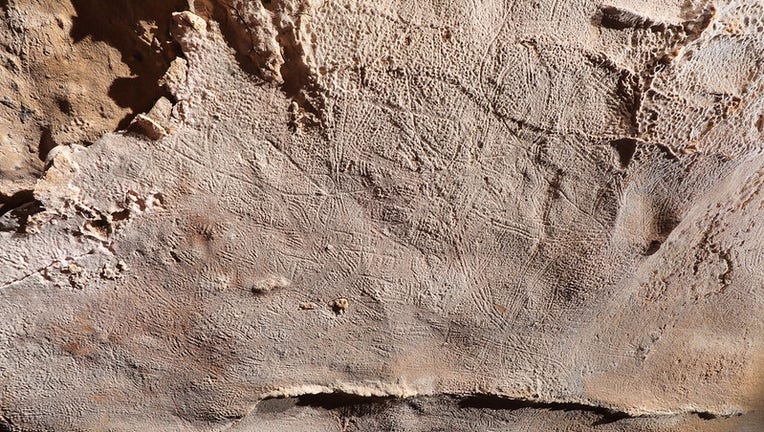 Massive Native American cave art images, which have remained unseen for over 1,000 years in an Alabama cave, were recently unveiled by a team of researchers.

The findings, detailed in a study published this week, are particularly significant in that it’s the largest known cave art ever discovered in North America — including a serpent-like figure that measures about 11 feet.

"Since its discovery in the mid-19th century, ancient cave art has captured the world's imagination," the researchers said. The team noted how the large figures recently unveiled may have represented "spirits of the underworld, their power and importance expressed in their shape, size and context."

The discovery was made inside "19th Unnamed Cave" in Alabama, which was given a purposely vague name to protect the site’s location. This cave is "the richest of all known cave art sites in south-eastern North America," and was first discovered to have such art in 1998, though only smaller images had been observed at that time.

The sprawling mud glyphs were inscribed on a cave room’s ceiling, which is so low that a person must crouch or crawl to move through the space. These larger images remained hidden from the naked eye until researchers used a technique called photogrammetry, a process in which thousands of photographs are taken and then used to build a 3D model.

"Due to the low ceilings, most of these images, even though less than 1m in size, can only be viewed by lying on the cave floor," the researchers wrote. "Thus, visibility of the cave art is constrained by the narrow confines of the cave itself, and the attenuated distance between the floor and ceiling limits perception of any larger images that might extend beyond the viewers’ field of vision.

Abstract shapes and swirling lines appear alongside images depicting serpents, insects, birds and other human-like figures. The cave art was done by Native Americans who lived sometime between 660 and 949 AD. It was also created pre-contact, or before the initial meetings between Native Americans and outside cultures, the researchers said.

Smaller mud glyphs from 19th Unnamed Cave: an image thought to depict a wasp with head to the left and abdomen to the right (0.35m across) Credit: Alan Cressler via Storyful

The artwork is found in the cave’s dark zone, or the deepest and darkest part of the cave that receives no sunlight. The researchers noted how cave art is a unique feature of eastern North American pre-history, writing that Native Americans who lived in this part of the country used caves "as sacred places."

The artwork was also created at a time when tribes were slowly shifting from being roaming foragers to farming and building long-term residential settlements.

"Caves were considered to be pathways to the underworld, juxtaposed with pre-contact cultural landscapes and their large-scale, organised, sedentary communities," the researchers wrote. "In those settlements, Native Americans in the Southeast built mounds, by which they could ascend to the spirits of the upper world for religious interaction."

The researchers wrote that the large figures drawn in the 19th Unnamed Cave were "elements in the broader sacred spiritual landscape of pre-contact Native Americans."