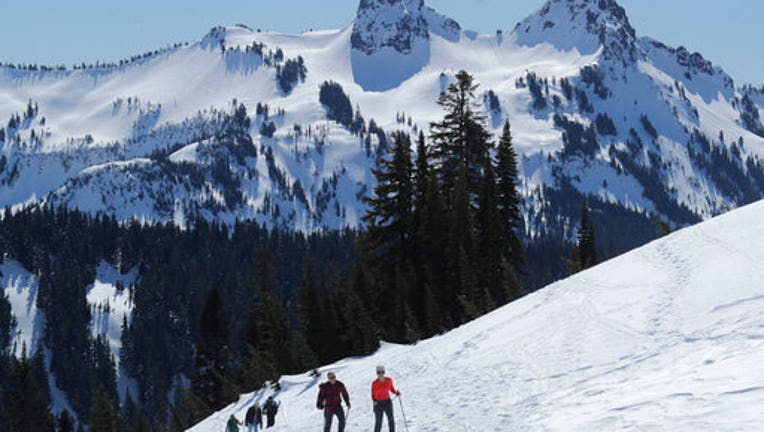 SALT LAKE CITY (AP) — Most national parks are open as a refuge for Americans tired of being stuck at home during a pandemic, but despite now being free to visit, people may find it more difficult to enjoy them as parks close visitor centers, shuttles, lodges and restaurants to fight the spread of the coronavirus.

Parks are trying to keep up with ever-changing rules and recommendations from government officials who are urging people to avoid gathering in large groups but allowing them to get outside for fresh air and exercise as long as they keep their distance from others.

The National Park Service says it's adhering to the latest guidelines from the White House and Centers for Disease Control and Prevention, vowing to keep outdoor spaces open while giving park superintendents the power to close or modify operations.

Interior Secretary David Bernhardt this week temporarily waived entrance fees at national parks, monuments and wildlife refuges to make it easier for people to get outdoors and “implement some social distancing."

“Getting out into the wilderness is perfect for what we call the ‘shack nasties’ — being cooped up inside your home,” said Trish Jacob, an employee of a backcountry guiding company near Rocky Mountain National Park.

But not everyone is on board with the idea of people descending on parks and their gateway towns to escape the virus.

Making parks free will lead to overcrowding and put staffers and visitors at greater risk of being exposed to the virus, according to a group representing park service employees.

“It is irresponsible to urge people to visit national park sites when gathering at other public spaces is no longer considered safe,” said Phil Francis, chairman of the Coalition to Protect America’s National Parks.

Executives at a hospital in Moab, Utah, also have implored state officials to slow the flow of people coming to see the red rocks and unique formations at Arches and Canyonlands national parks over fears the city's hospital couldn't handle an outbreak. In response, officials this week limited hotel stays to people in town for work and banned dining in restaurants.

Nationally, park superintendents are devising ways to stay open while keeping people at safe distances from one another and trying to ensure park employees stay healthy. Many parks closed visitor centers, museums and entrance booths while rangers are stationed outside to field visitors' questions.

Though rangers are working, some parks warned people to be extra cautious and prepared, especially in places with wintry weather, because resources are strained amid the pandemic and rescues may be more difficult.

Zion National Park in southern Utah halted shuttles used by most people visiting its red rock vistas nestled in a narrow canyon. Tourists now must wait for limited parking to free up before driving in. Grand Canyon National Park stopped its shuttles and closed its restaurants.

In Northern California, visitor centers at several destinations managed by the park service, such as Muir Woods National Monument, Alcatraz Island and the Golden Gate Bridge, are closed.

Yellowstone National Park, Mount Rainier National Park in Washington state and Rocky Mountain National Park in Colorado followed suit. Most facilities and roads in Yellowstone — which spans parts of Wyoming, Montana and Idaho — and Rainier normally are closed this time of year because of deep snow. The Statue of Liberty National Monument and Ellis Island in New York are closed entirely.

Workers at Grand Canyon have shifted away from duties that put them close to tourists.

“We’re just coming up with different ways for them to do their jobs that’s mindful of the CDC guidelines,” park spokeswoman Lily Daniels said.

For most people, the coronavirus causes only mild or moderate symptoms. But for the elderly and people with existing conditions, it can cause more severe illness. The vast majority of those who are infected recover.

The Utah hospital's concerns aren't related to being in the wilderness but rather the social interactions before and afterward at hotels, bars, restaurants and often crowded trailheads or entrance gates.

"We’re just encouraging people stay home and stay in their residences and to wait out this two weeks and hopefully things will return to some kind of normal,” said Elaine Gizler, executive director of the Moab Area Travel Council.

Like the interior secretary, U.S. Sen. Mitt Romney of Utah has encouraged people to enjoy the parks and open spaces where they can keep distance from others.

Takahashi trudged through fresh snow during a three-hour hike to Emerald Lake last week, passing other alpine lakes surrounded by towering peaks. The 3-mile (5-kilometer) trek was a much-needed escape.

“It’s a very refreshing time to be outdoors, to get the health benefits of exercising, be in the sunshine, and get away as well from the anxiety I’ve felt, that we’re all feeling, about the virus," said Takahashi, a 32-year-old freelance Japanese language translator who blogs about the outdoors.

Businesses in Estes Park, a gateway town for Rocky Mountain National Park, are watching virus developments warily. The town of 6,000 relies heavily on the park, which drew a record 4.6 million visitors in 2018.

“We are open for business until the city tells us otherwise,” said Jacob, who works for Kirk Mountain Adventures, which offers snowshoeing, fly fishing, hiking, backpacking and other excursions into the park.

Kirk employees were leading snowshoeing and fly fishing trips this week — each limited to three people, not because of the virus but because many visitors want a more intimate experience in nature. But spring break business is slightly down, Jacob said.

Like its Moab counterpart, the Estes Park Chamber of Commerce is focusing more on helping its members deal with the virus than promoting tourism. The town’s already been hit by a statewide ban on dining at restaurants and bars.

If there's any silver lining, Pearson said, it may be better that the first shock waves from the coronavirus are hitting now, rather than during the peak summer season. He noted that Estes Park has bounced back before: It was isolated by devastating flooding in 2013.

“By Memorial Day, if the worst can be in the rear-view mirror, that would be fantastic," Pearson said.