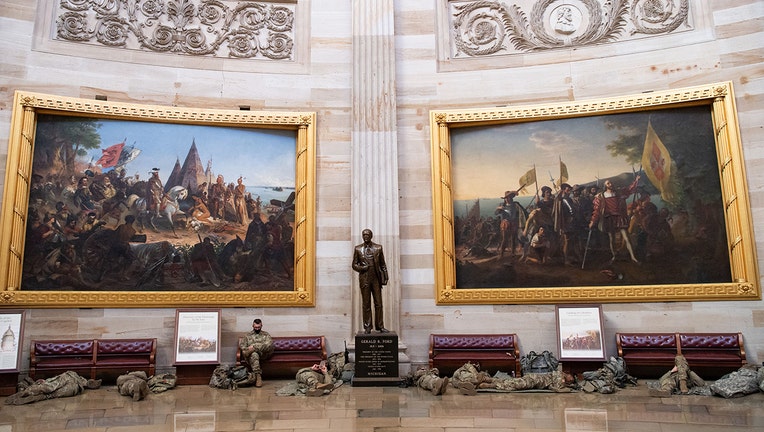 Members of the National Guard take a rest in the Rotunda of the US Capitol in Washington, DC, January 13, 2021. (Photo by SAUL LOEB/AFP via Getty Images)

WASHINGTON - 15,000 National Guard members have activated and are deploying to Washington, D.C., to help provide security in the run up to the inauguration of President-elect Joe Biden.

Many are already inside the Capitol building.

The number of Guard members coming in from other states has been growing, amid escalating fears of more violent protests in the wake of the deadly riot at the U.S. Capitol last week.

The Army also said Tuesday that officials are working with the Secret Service to determine which Guard members may need additional background screening. Democratic Rep. Jason Crow of Colorado had asked Army Secretary Ryan McCarthy to have the Army’s Criminal Investigation Command screen Guard members coming in to ensure they were not "sympathetic to domestic terrorists." 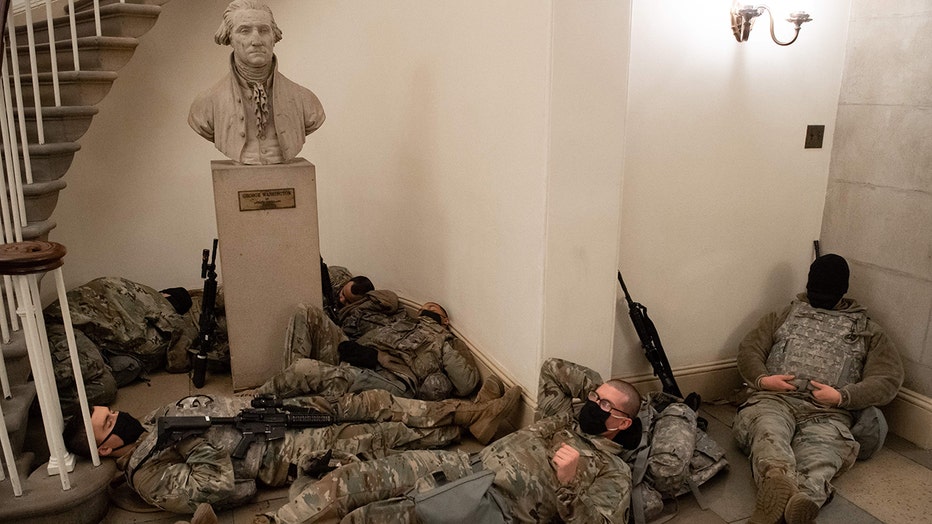 Members of the National Guard take a rest in the Rotunda of the US Capitol in Washington, DC, January 13, 2021. (Photo by SAUL LOEB/AFP via Getty Images)

The Army said some members may be subject to additional background screening. Traditionally, those who get within close proximity to the president -- or in this case the president-elect — are checked more closely. So far, officials said they have not yet identified any Guard members who participated in the protests.

The Army said the D.C. National Guard is also giving troops additional training as they arrive in the city, so they know to identify and report any extremist behavior to their commanders.

The Army also said it is working with the FBI to identify people who participated in Capitol attack, adding, "any type of activity that involves violence, civil disobedience, or a breach of peace may be punishable under the Uniform Code of Military Justice or under state or federal law."

Meanwhile, Republican lawmakers are objecting to new metal detectors outside the House chamber that were added as a security precaution following last week’s deadly attack on the Capitol. 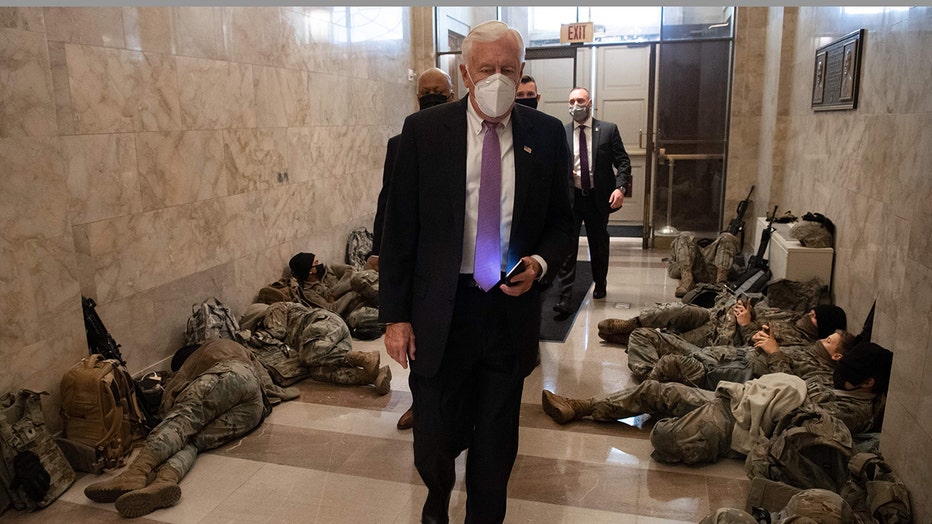 House Majority Leader Steny Hoyer, Democrat of Maryland, walks past members of the National Guard as he arrives at the US Capitol in Washington, DC, January 13, 2021. (Photo by SAUL LOEB / AFP) (Photo by SAUL LOEB/AFP via Getty Images)

Louisiana Rep. Steve Scalise, the No. 2 House Republican, said Tuesday that the metal detectors were designed to impede lawmakers from voting and were not discussed with GOP leaders ahead of time.

Rep. Rodney Davis of Illinois was angry about the metal detectors and said valuable resources were being diverted in order to install the devices.

Several lawmakers simply walked around the devices. Texas Rep. Louie Gohmert said, "You can’t stop me. I’m on my way to a vote."

Freshman Rep. Lauren Boebert of Colorado, who has announced her intention to carry a gun on Capitol grounds, set off a metal detector. It wasn’t clear if she had a cellphone or other metal object in her purse.

She refused to allow a search of her bag and eventually was let into the House chamber.

The New Jersey Democrat says that some of the protesters who rioted in the Capitol had taken reconnaissance tours the previous day.