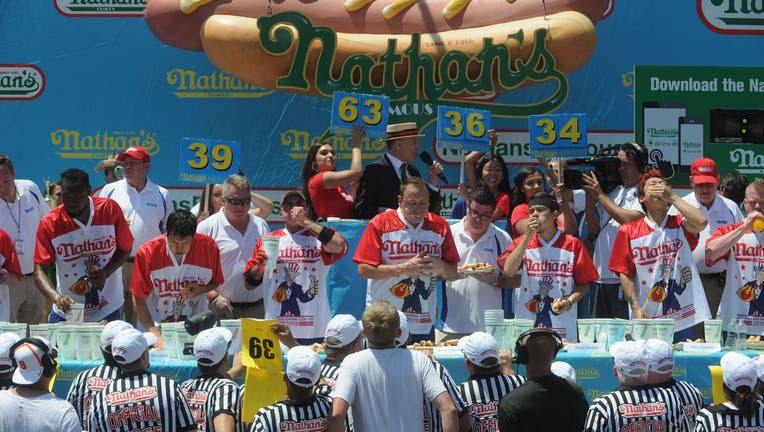 NEW YORK - An Independence Day staple, the Nathan's International Hot Dog Eating Contest is set to return in 2021 in front of a live audience.

The annual event took place last summer without fans in attendance due to the COVID-19 pandemic. Only members of the media were allowed to witness the annual wiener-fest on iconic Coney Island.

But as cases continue to drop in New York and vaccination rates increase, organizers are ready once again for crowds to gather to watch the gorge-fest. The competition will "follow all federal, state and city health and safety regulations," organizers said.

The event will be held in a new location: Maimonides Park, home of the Brooklyn Cyclones, down the street from its traditional location in front of Nathan's Famous at the corner of Surf and Stillwell avenues.

"It is encouraging to hold this event live for fans, who last year were unable to celebrate July 4 as they traditionally do," said James Walker, a senior vice president at Nathan’s Famous. "Next year, we hope to return to the corner of Surf and Stillwell avenues, where we have held this event for decade after decade."

On the women's side in 2020, Miki Sudo won her seventh title in a row and set a women's world record by scarfing down 48.5 hot dogs and buns.

This year's event is free but does require a ticket, which are available on a first-come, first-served basis. Doors open at 10 a.m. The women's competition starts at 11 a.m. The men chow down at 12:30 p.m.