How the phrase 'Let's go, Brandon' became a Biden insult

The phrase "Let's go, Brandon" has become code in conservative circles for swearing at President Joe Biden. It took off after an Oct. 2, 2021, incident at a NASCAR race in Alabama.

AVONDALE, Ariz. - NASCAR denounced its association with the "Let's go, Brandon" political cry being used across the country as an insult directed at President Joe Biden. Steve Phelps, NASCAR's president, said Friday the top motorsports series in the United States does not want to be associated with politics "on the left or the right."

Phelps also said NASCAR will pursue action against any illegal use of its trademarks on merchandise boasting the slogan. Retired baseball star Lenny Dykstra posted a photo on Twitter this week of a man eating breakfast at a New Jersey hotel wearing a black "Let's go, Brandon" shirt alongside NASCAR's trademarked color bars.

"We will pursue whoever (is using logos) and get that stuff," Phelps said. "That's not OK. It's not OK that you're using our trademarks illegally, regardless of whether we agree with what the position is."

Brandon Brown won his first career NASCAR race in October in Alabama, and the Talladega Superspeedway crowd at the Xfinity Series race chanted "F--- Joe Biden" during Brown's interview. It was not clear if NBC Sports reporter Kelli Stavast, who was wearing a headset, could hear what the crowd was saying during the interview, and she incorrectly told Brown the fans were cheering "Let's go, Brandon."

The phrase has become a rallying cry for Biden's critics, and "Let’s go, Brandon" is now conservative code for the original vulgar chant. 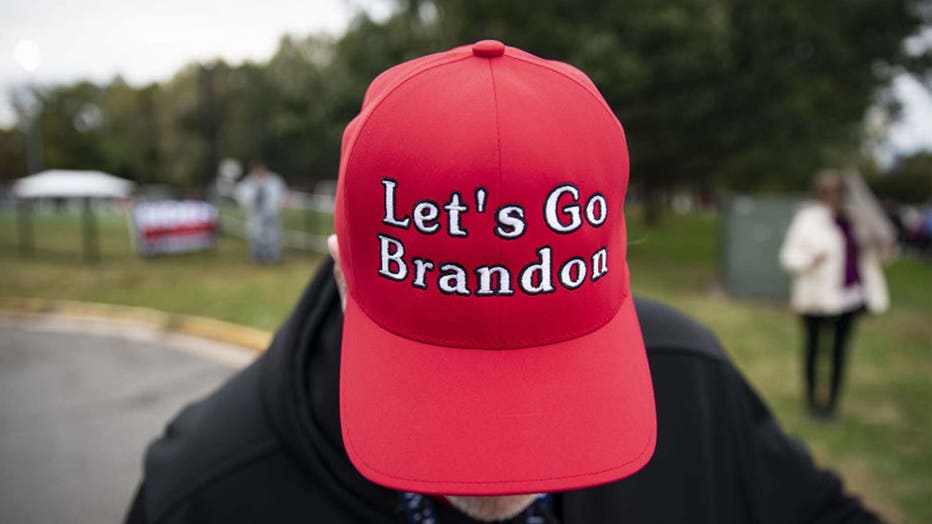 "It's an unfortunate situation and I feel for Brandon, I feel for Kelli," Phelps said. "I think unfortunately it speaks to the state of where we are as a country. We do not want to associate ourselves with politics, the left or the right."

That's a reversal on NASCAR's long history of allowing political candidates to use its races as campaign stops. President Donald Trump was the honorary starter at the Daytona 500 in 2020 and the sold-out February crowd made NASCAR's Super Bowl feel like a campaign rally until his plane flew over the Florida speedway after his command to start the engines.

Drivers and their families posed for selfies with Trump ahead of the race, and in early 2016 reigning Cup champion Chase Elliott was among a handful of drivers who attended a Georgia rally with then-NASCAR chairman Brian France in support of Trump. Several in the group, including NASCAR's most popular driver, spoke on stage.

NASCAR also took aggressive positions on social justice issues in 2020 during a nationwide racial reckoning following the death of George Floyd. NASCAR banned the display of the Confederate flag at its events at the request of Bubba Wallace, its only Black full-time driver. Wallace wore an "I Can't Breathe" shirt on pit road and ran with a Black Lives Matter paint scheme in one race.

"Do we like the fact that it kind of started with NASCAR and then is gaining ground out elsewhere? No, we're not happy about that," Phelps said.