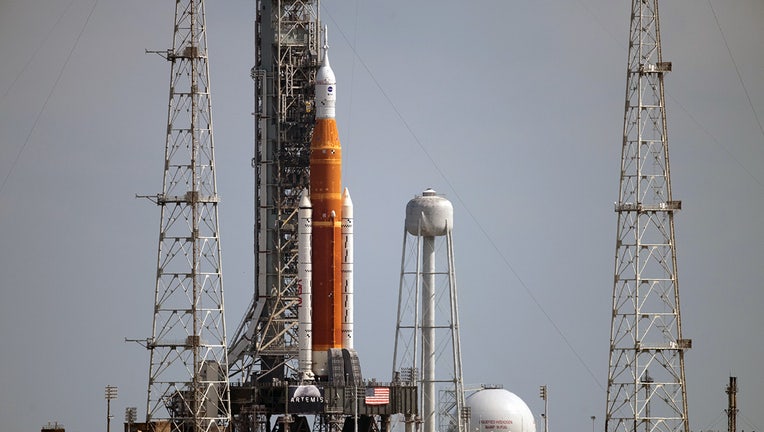 NASA’s Space Launch System (SLS) rocket with the Orion spacecraft aboard is seen atop a mobile launcher at Launch Complex 39B, Sunday, April 3, 2022. (NASA/Joel Kowsky)

CAPE CANAVERAL, Fla. - During its fourth attempt this year, NASA successfully completed fueling its mega moon rocket with super-cold propellant that will eventually return humans to the moon as part of a launch dress rehearsal.

Artemis-1 Launch Director Charlie Blackwell-Thompson gave the "Go" Monday around 8:45 a.m. to begin loading 700,000 pounds of cryogenic fuel into the 32-story Space Launch System rocket with the Orion spacecraft on top at launchpad 39B.

Monday's fueling operations and countdown are part of a test known as the wet dress rehearsal and was previously attempted three times in April. Still, after several hardware issues cropped up, the rocket was rolled back into the Vehicle Assembly Building for repairs.

After more than 12 hours into the test, teams continued through the countdown despite a new leak that was discovered after the rocket was fully fueled. The mission management team came up with a plan to have the launch computer "ignore" the alarm from the leak to proceed with the countdown and gather more data.

"The team has done a fantastic job developing a plan for the rest of our time today. We want to get (the) most out of (the) test today, because the more we do, the more we learn," NASA associate administrator for Exploration Systems Development Mission Directorate Jim Free said on Twitter. "We will get as deep as we can in the count, but may stop to keep SLS and Orion safe."

Operations began around 7 a.m. Monday. Meteorologists with the Space Force's 45th Weather Squadron forecast favorable conditions for the Monday test. There must be a less than 20% chance of lightning within 5 nautical miles from the launchpad during the first hour of fuel loading.

WATCH LIGHTNING STRIKE NEAR A MASSIVE SPACE ROCKET IN FLORIDA

The count was first put on hold early in the day as teams worked through an issue with a backup supply of gaseous nitrogen.

Assistant Launch Director Jeremy Graeber said the team had to replace a controller for one of the two gaseous nitrogen valves after an issue this morning. There are two valves, each with a controller, which allows for more opening or closing.

"We need to have redundancy, a primary and a backup," Graeber said.

After the delays, preparations for fuel loading began at 9:28 a.m. as the countdown resumed.

The liquid hydrogen loading was problematic for one of the previous wet dress rehearsal attempts after detecting a leak. It appears that was not a problem on Monday, as fueling proceeded into the afternoon.

Both tanks were more than 60% complete by noon, and by 1:30 p.m., both LOX and liquid hydrogen tanks in the core stage were full. The teams next moved to fill the upper stage, known as the ICPS (Interim Cryogenic Propulsion Stage), with both fuel types. 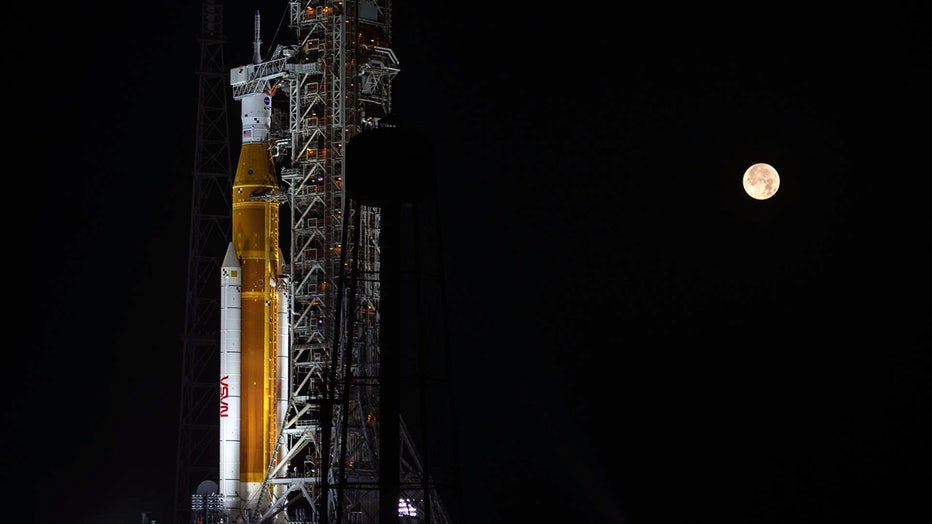 A full Moon is in view from Launch Complex 39B at NASA’s Kennedy Space Center in Florida on June 14, 2022. Photo: NASA/Ben Smegelsky

Another leak in a new place

During the propellant loading, engineers conduct leak checks along the way. During the upper stage fueling, engineers noticed a leak in a quick disconnect hydrogen line for the core stage and halted fueling momentarily to troubleshoot the issue.

With the leak still not resolved the countdown picked up again at T-10 minutes and continued to T-29 seconds before the launch computer flagged another issue and the countdown stopped. NASA was targeting to get down to the T-9 second mark.

Blackwell-Thompson said it was important for the launch team to get into the final minutes of the countdown known as terminal count because there are a number of milestones that happen.

"We have done this many times in a (simulations) but we haven’t done it with cryogenics on the vehicle," Blackwell-Thompson said. "Our team really wanted to get into the terminal count and see how our team performed and our vehicle performed and they both performed really well."

Mission managers are reviewing the test data Monday night to determine if another wet dress rehearsal will be necessary. Blackwell-Thompson said it was too early to say if another test would be needed without reviewing all the data.

The launch team worked through the countdown like they would on launch day. However, the rocket was always meant to stay firmly on the ground at the end of the countdown.

After the wet dress rehearsal is complete, NASA is expected to announce a launch date for Artemis-I.

During a call with reporters last week, Free estimated the agency would look at the launch window from Aug. 23 to Sept. 6.