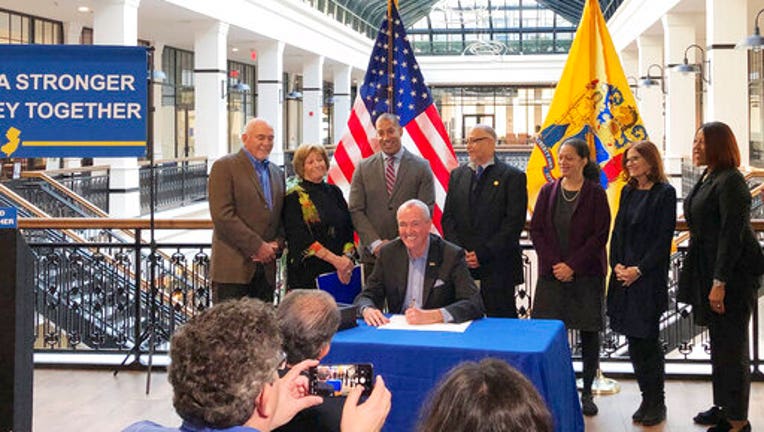 Democratic Gov. Phil Murphy, seated, signs an executive order creating a board to look into setting up a state-run bank, alongside labor and other supporters, Wednesday, Nov. 13, 2019 in Newark, N.J. New Jersey would be the second state after North D

New Jersey Gov. Phil Murphy will lay out his agenda for the year as he delivers his second State of the State address before a joint-session of the Democrat-led Legislature on Tuesday.

The Democrat, who is a self-styled progressive and former Wall Street executive, took office in 2018 succeeding Chris Christie. The two could hardly be more different on a number of issues.

Murphy spent the past two years undoing many policies enacted by his Republican predecessor, signing — instead of vetoing — gun control legislation, a phased-in $15 minimum wage and tax hikes to pay for transit and education.

Despite Democratic control of the governor's mansion and the Legislature, Murphy and Senate President Steve Sweeney have clashed prominently, leading to the delay in enacting one of the first-term governor's policy proposals: a tax hike on incomes over $1 million.

Sweeney opposes such an increase, arguing that the 2017 federal tax overhaul changed the picture in New Jersey by capping property tax deductions at $10,000 in a state where the average bill is nearly $9,000.

Murphy has given no indication that he'll walk away from his push for the tax hike. He says it's needed to finance the state's obligations, such as public pension and retiree benefits as well as education. The top rate currently is 8.97%. Murphy had previously proposed boosting it to 10.75%.

Republicans balk at the proposal, arguing that it would lead to residents fleeing the state.

Legislative leaders and Murphy do agree, however, on legalizing recreational marijuana, which will be on the ballot in November for voters to decide. But if voters approve the question, Murphy and lawmakers would still have to come together on legislation to regulate the new industry. New Jersey would become the 12th state with legalized recreational marijuana for adults.