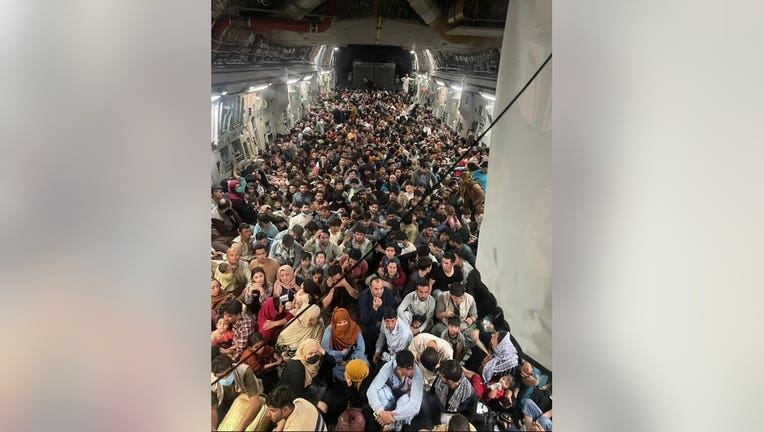 A photo shows a U.S. military plane filled with people being evacuated from Afghanistan in August, 2021.(File)

INDIANAPOLIS - More than 6,000 Afghan refugees are being housed at the Indiana National Guard’s Camp Atterbury training base and preparing for permanent resettlement, two weeks after the first wave of evacuees arrived.

After the first group of roughly 1,000 evacuees were admitted to the camp on Sept. 2, 6,603 Afghan refugees were being housed at Atterbury as of Wednesday, said Mark Howell, a spokesperson for the Department of Homeland Security.

More than 1,300 service members, along with 69 government employees and 83 non-governmental volunteers, are also on the base to facilitate the operation, Howell said.

President Joe Biden said the U.S. war in Afghanistan is over. He defended his decision to pull out all military forces after two decades of conflict.

More than 11,600 vaccines for measles, mumps, rubella and varicella had been given to refugees at Atterbury as of Tuesday.

Although measles cases were reported in refugee populations in both Virginia and Wisconsin earlier this month — leading to a temporary halt on in-bound refugee flights from Afghanistan — Howell said no measles cases have been reported at Camp Atterbury.

Officials confirmed there had been 13 confirmed cases of COVID-19 at the base, and those who tested positive are isolating with their families.

Less than 1% of the refugees at Atterbury have received health care off base, Howell continued, though some have been treated at Johnson Memorial Hospital in nearby Franklin.

The refugees are subject to a 14-day quarantine at Camp Atterbury to determine their medical and visa statuses. Indiana National Guard Adjutant Gen. R. Dale Lyles said earlier this month that non-governmental agencies will aim to resettle them within 10 weeks.

An additional 1,660 resettlement interviews have taken place since Tuesday, and 1,420 fingerprint and photograph sessions have been completed.

FOX 5 NY speaks with two local veterans who served in America's longest war and are experiencing a range of raw emotions as the U.S. leaves Afghanistan.

The Biden administration on Wednesday notified governors and state refugee coordinators across the country about how many Afghan evacuees from among the first group of nearly 37,000 arrivals are slated to be resettled in their states.

Indiana is projected to take 490 arrivals, according to U.S. officials.

The last U.S. forces flew out of Kabul’s airport in late August, ending America’s longest war following an airlift of Afghans, Americans and others escaping a country once again ruled by the Taliban.

Indiana Gov. Eric Holcomb has maintained that Indiana is committed to helping the evacuees, which include American citizens, Afghan allies who helped in the military effort and those deemed vulnerable Afghans by the U.S. government.

Holcomb announced this week a regional collection system to receive, sort, and deliver items donated by Hoosiers to the thousands of Afghan evacuees at Camp Atterbury.

Men’s and women’s unbranded, modest clothing, children’s clothing, socks and shoes, and powdered baby formula are the most needed, according to the governor's office. New items in original packaging will be accepted Monday through Friday from 8 a.m. to 4 p.m. at the nine Indiana National Guard armories across the state.