KANSAS CITY, Mo. - Missouri officials are investigating what caused more than 50,000 fish to die in a stream near Kansas City.

An estimated 50,000 sunfish, 1,900 common carp and 240 silver carp were killed in Brush Creek, a 10.5-mile-long stream running through Johnson County, Kansas, to Jackson County, Missouri, according to the state’s conservation department.

Video recorded June 14 by Terrence McKelvy showed the dead fish floating in the water in a section of the stream that runs between Prospect Avenue and Benton Boulevard.

"Look at this," McKelvy says in the video, who was on a bike ride and stopped to record the footage when he noticed the dead fish. "These are all fish in Brush Creek. Look at these big carp."

"If you’re driving down Blue Parkway this morning, and you smell something weird, it’s because there are about, no exaggerating, about a million dead fish that have floated to the top," McKelvy adds in the video.

The Missouri Department of Conservation said it was notified the same day the video was recorded and began monitoring the creek. In a statement, the department said heavy rain in the area on June 11 may have raised the water levels and caused the carp to swim upstream into an area between two concrete weirs.

When water levels dropped, the fish may not have been able to swim back out to the Blue River, of which Brush Creek is a tributary. 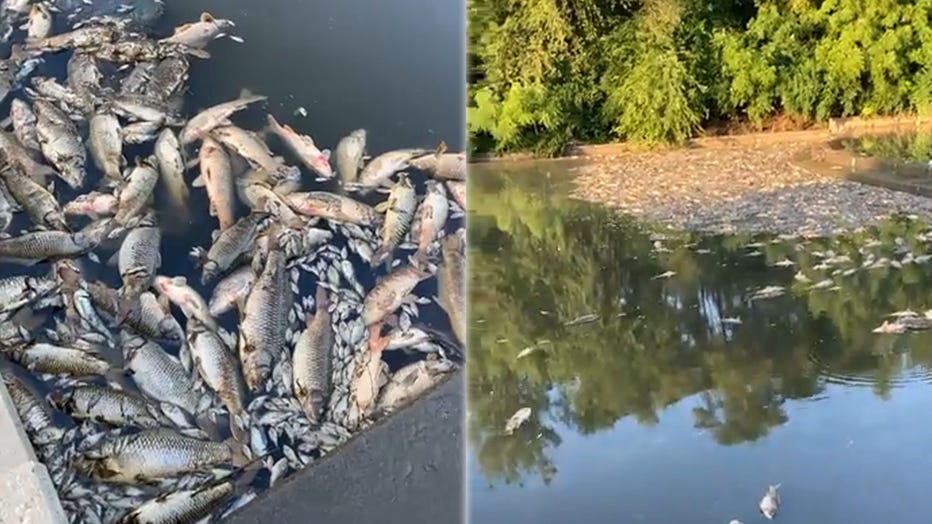 The state’s Department of Natural Resources tested the water to determine what officially caused the deaths — which officials referred to as a "fish kill." State conservation officials said Missouri experiences about 200 fish kills and other water quality issues that pose a threat to fish and other wildlife.

Half are caused by natural events and the rest by pollution, the department said.