VAIL, Colo. - A Moose found wandering in a Colorado parking garage was tranquilized and removed by wildlife officials this week after becoming accustomed to the area and "reluctant to leave on its own."

The bull moose, estimated to be about 2 to 3 years old and about 750 pounds, was relocated on Tuesday from a parking structure at the Lionshead Village business center in Vail, Colorado.

Residents of the neighborhood had been calling Colorado Parks and Wildlife (CPW) about the moose for around a month, and officials said the animal had been frequenting the ground level of the parking garage for about the past 10 days. The structure serves as parking for both the business center and the nearby Vail Health Hospital.

The moose had been licking the walls, "presumably for all the deicing agents that are used on the upper-story decks of the parking structure," wildlife officials said in a statement. CPW added that it has worked closely with the town of Vail to remove residual salts that may have served as an attractant.

"Largely, most of these neighborhoods coincide with really optimal moose habitat, notwithstanding the fact there are a lot of pedestrians and human activity," Wildlife Officer Devin Duval said in a statement. "Moose are not fully concerned with that, they usually are unencumbered by the activity here in Vail."

Initially, wildlife officers didn’t feel that the young bull moose was acting aggressively — but the animal was agitated by the presence of dogs.

"The tipping point for going hands-on to relocate the moose came when it started spending the majority of the day in the area," CPW said. 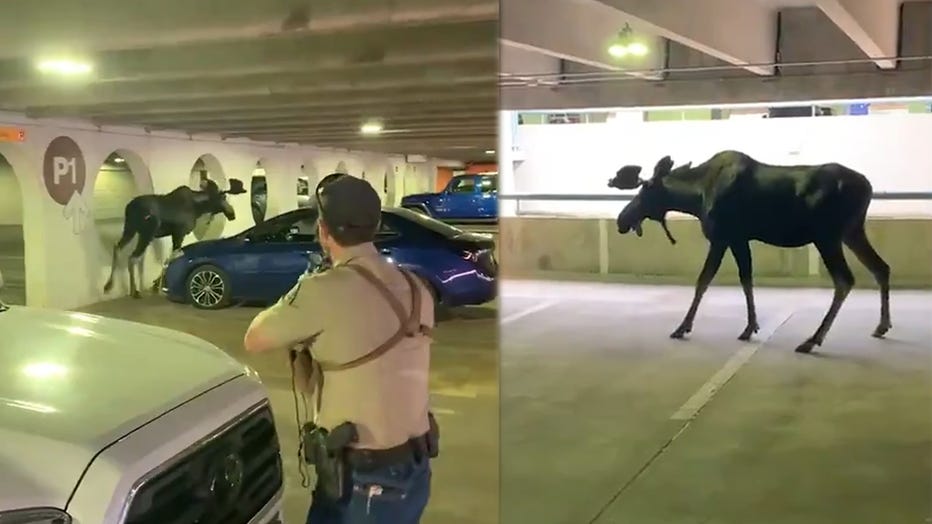 Video shared on Twitter showed the moose being tranquilized before being lifted out of the parking lot by Vail Fire, Vail Police and crews from the Town of Vail Public Works Department.

The animal was then released "in prime moose habitat" outside of Craig, Colorado.

"Everything went smoothly this morning, no issues," Duval said of the operation to tranquilize the bull, which started around 8:25 a.m. local time. "We were definitely within that human health and safety realm where there could potentially be an injury to a human or the animal. That is the reason we decided to move it."