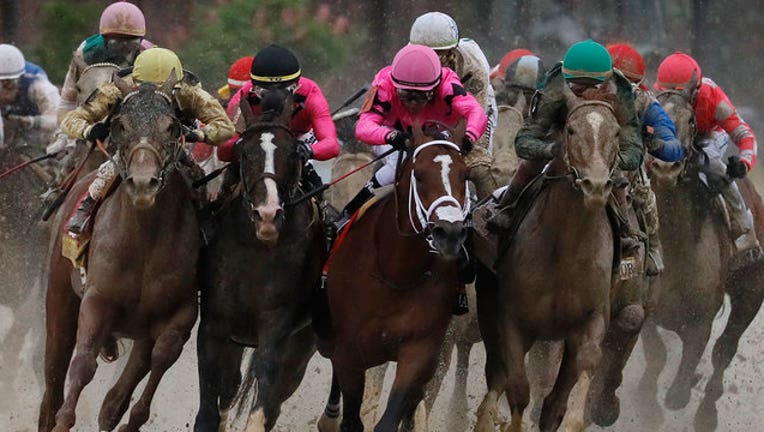 FILE - In this May 4, 2019, file photo, Flavien Prat on Country House, left, races against Luis Saez on Maximum Security, third from left, during the 145th running of the Kentucky Derby. (AP Photo/John Minchillo, File)

The decision came after the start of the first race was delayed and the racing card was re-evaluated after the second race.

Animal rights activists protested outside the New Jersey Shore track before the first race was to run.

Dennis Drazin, chairman and chief executive of Darby Development, operators of Monmouth Park, said a group of track, state and independent veterinarians monitored the heat for days and felt it was safe to race.

"However, given the heightened concern from the public about the heat, and in the interest of the safety of the horses and jockeys, we've decided to proceed with an abundance of caution, to cancel the remaining nonstakes races and to delay the six stakes races," he said.

Drazin said he had been in contact with New Jersey Gov. Phil Murphy, who left the decision on whether to race to Drazin. He went with caution, fearing harm to the horses and industry if there were a death.

With racing under pressure because of many horse deaths horses in California, most East coast tracks on Friday canceled their Saturday cards, including Saratoga Race Course and Finger Lakes in New York and Laurel Park in Maryland.

"It would have created additional momentum to the crisis that already exists because of California problems," Drazin said of a possible death of a horse. "We're on the cusp of a crisis in the industry."

A crowd of 37,186 attended last year's Haskell, and another big crowd was expected Saturday for Monmouth Park's biggest racing day. When the announcement came of canceled races and the delayed stakes, fans streamed to the exits.

Drazin said no decision had been made on how to compensate fans who paid for admission and parking.

In addition to the Haskell, the card's other stakes races are The Oceanport, The Molly Pitcher, The Wolf Hill, The Monmouth Cup and the Matchmaker.

NBC was going to televise the Haskell live when it had a 5:47 p.m. post time. Monmouth spokesman Tom Luicci said the network planned to fill its 5-6 p.m. slot with other horse-racing covering. It was going to stream the race live on its digital platform at 8:05 p.m., he said.

The start of the first race was delayed by almost 40 minutes, with no reason given at the time for the move. The 14-race card was reassessed after the next race. The six stakes races were reset for 6 p.m., with the Haskell at 8:05 p.m.

Maximum Security, who finished first in the Kentucky Derby and then was disqualified, leads the field of seven in the 1 1/8-mile Haskell.

The first two races went off without incident. The horses were hosed down on the track after the races. There were misting fans in the paddock before the races.