FWC officials reported Monday that they have taken at least a dozen reports of monkey sightings in St. Johns, Duval and Putnam Counties since September.

ST. AUGUSTINE, Fla. - A monkey was spotted picking oranges outside of a Florida home this weekend.

A St. Augustine resident, Colleen Sokol, said that she spotted a monkey in her backyard on Sunday morning.

After taking some photos, she said the monkey went back into the nature preserve but an hour later, he was back and taking oranges from Sokol's tree. 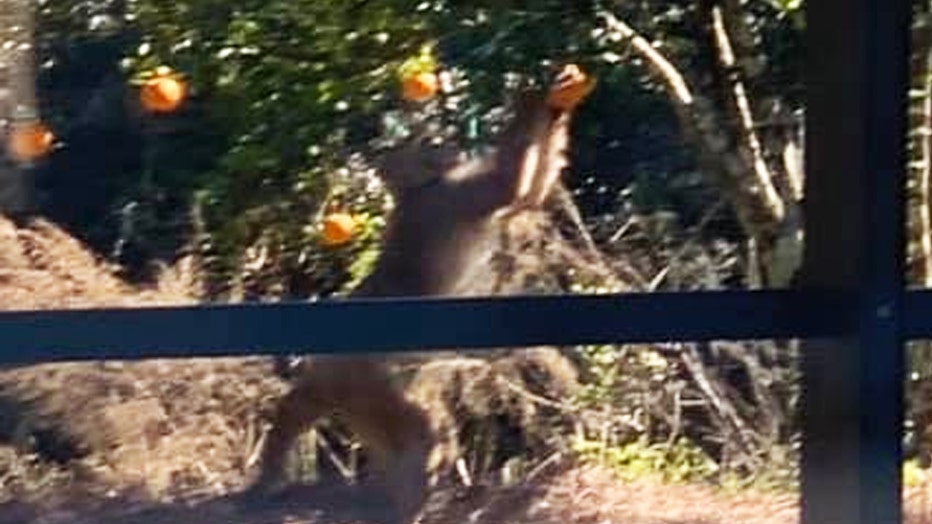 Sokol said that the Florida Fish and Wildlife Commission (FWC) has been notified about the monkey. She said that if the animal becomes a nuisance, their development can hire a trapper. In the meantime, they have nicknamed the monkey 'Curious George.'

However, her sighting adds to a growing list in the area that may be concerning.

FWC officials reported Monday that they have taken at least a dozen reports of monkey sightings in St. Johns, Duval and Putnam Counties since September.

Agency educational materials from before then don't list a single sighting on record north of Flagler County along the state's east coast.

An agency representative said Monday that the sightings are likely roaming monkeys originating from the population in Silver Springs State Park.

That population has been an ongoing issue for wildlife officials and park visitors, some of whom have captured video of the invasive rhesus macaques charging toward people and even leaping out of the trees into a river around kayakers.

Scientists say there is a growing population of rhesus macaques there and that their population will double by 2022 unless state officials intervene.

The growing population problem began in the 1930s when the original six rhesus macaques were released onto a small island in the Silver River, which is now part of the Silver Springs State Park today.

The initial purpose was to create a tourist attraction. It turned out the rhesus macaques are strong swimmers and escaped into the woods. More were brought in to replace them, but they also left.

By the 1980s, there were hundreds of them. In 2018, the Florida Fish and Wildlife began prohibiting people from feeding the monkeys due to fears that the species, not native to the state, could spread a deadly-to-humans form of herpes.

Over the years, FWC has recorded the monkeys roaming outside of the park in the Orlando area and beyond, but these sightings in the northeast portion of the state may show new movement in the likely growing population.

FWC officials have released guides on their website to dealing with the monkeys, and they encourage anyone who encounters one to report it to the state immediately.

They urge people who encounter them not to approach, to keep pets away from them, to seek medical attention if scratched or bitten, and to not feed the monkeys under any curcumstance.

Sokol said that she is not concerned about the monkey and is more concerned with the rattlesnakes and cottonmouths around her yard.

However, with that said, she told FOX 35 that she also does not intend on feeding it or getting close.