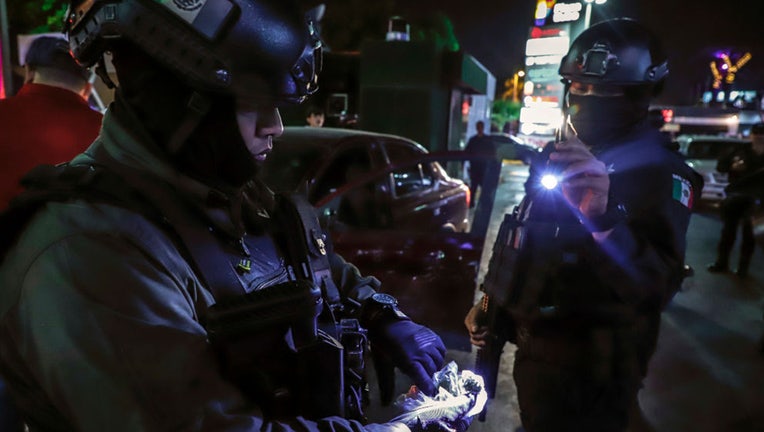 FILE - Sinaloa state police agents check a plastic bag with a suspicious substance found during a security operation in the city of Culiacan, Sinaloa state, Mexico on Feb. 15, 2019. (RASHIDE FRIAS/AFP via Getty Images)

A monkey wearing a bulletproof vest was found among the dead after a bloody shootout between police, soldiers and gunmen in central Mexico on June 14.

The spider monkey found at the scene was wearing a camouflage fleece jacket and a diaper but officials were unable to confirm whether or not it died from gunfire.

Officials did confirm 10 people died in the shootout and another four were injured.

Photos from the scene of the shootout with police showed a small monkey sprawled across the body of a dead gunman who was apparently his owner.

The alleged owner of the monkey was identified as a man in his 20s. It was speculated that he was a member of the La Familia Michoacana criminal group, the Mexico Daily Post reported.

Authorities in the State of Mexico confirmed the authenticity of the photos.

"A primate was killed at the scene, which was presumably owned by a criminal who was also killed at the scene," state prosecutors said in a statement given to the Associated Press, adding, "An autopsy will be carried out on the animal by a veterinarian specialized in the species" and animal-trafficking charges would be considered against the suspects who survived the shootout.

Prosecutors in the State of Mexico, which borders Mexico City, said three detectives were also wounded in the gun battle.

Their injuries were apparently not life-threatening.

The shooting occurred about 80 miles (130 kilometers) southwest of Mexico City, in the town of Texcaltitlan, when the suspects opened fire on police.

Prosecutors said the detectives seized 20 rifles, pistols and military-style uniforms and bulletproof vests at the scene. The area has been the scene of frequent killings and extortion by drug gangs.

Like scenes out of a narco television series, exotic animals have long been part of the Mexican criminal underworld.

On June 15, the Attorney General for Environmental Protection said it had seized a tiger in Tecuala, in the Pacific coast state of Nayarit, near the border with Sinaloa, which is home to the cartel of the same name.

The office said it acted "after receiving reports about a Bengal tiger that was wandering the streets of Tecuala," and found that the animal was being illegally kept there.

Those reports were based on a video posted on social media earlier last week, showing a young woman shrieking as she came across the tiger on the street in a residential neighborhood. "Be quiet, it might come close," a woman can be heard saying in the video.

Authorities said the tiger’s claws and fangs had been removed, and a man can be seen later in the video casually tossing a rope over the tiger’s neck and leading him away.

Perhaps the most tragic story came out of the western state of Michoacan, which has long been dominated by the Carteles Unidos gang and the Jalisco cartel.

On Sunday, authorities confirmed that a man was seriously wounded by a tiger in Periban, Michoacan, a town in the state’s avocado-growing region, where gangs have long extorted protection payments from the lucrative avocado trade.