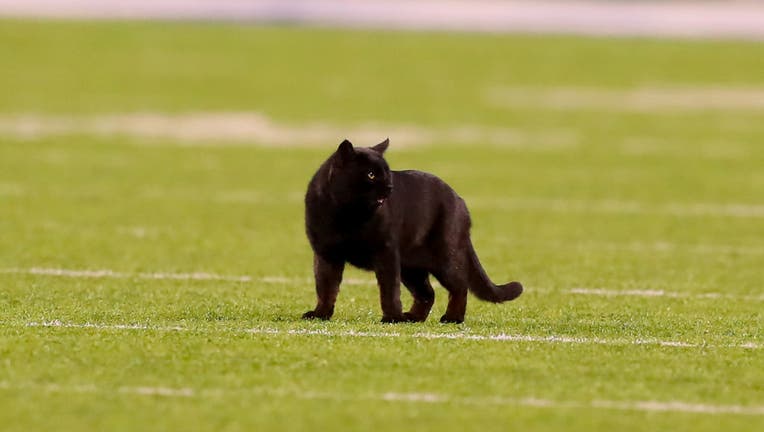 EAST RUTHERFORD, NJ - NOVEMBER 04: A Black Cat runs onto the field during the National Football League game between the New York Giants and the Dallas Cowboys on November 4, 2019 at MetLife Stadium in East Rutherford, NJ. (Photo by Rich Graes fourths

MetLife Stadium officials said Thursday the search for the fleet feline that briefly delayed the nationally televised game between the New York Giants and Dallas Cowboys on Monday night has been unsuccessful.

The search started on Tuesday morning with multiple humane traps being stationed in the stadium. After that came up empty, stadium officials asked PuppykittyNYCity — a trap, neuter, release and no-kill shelter — for help.

"We are hopeful that together we can find the black cat that we all fell in love with Monday night," the stadium statement said.

PuppykittyNYCity said in a statement Thursday that if the cat is caught, it will be assessed for a home or relocation.

"Even though we want to relocate him, we still support TNR (trap, neuter, release) programs," the nonprofit, volunteer-run rescue organization said in its release.

The cat scampered on the field during a Giants drive in the second quarter and forced referee Clay Martin to delay the game for roughly five minutes Monday night. Workers at MetLife Stadium and some New Jersey state troopers herded the feline toward the end zone away from the players.

The cat didn't leave right away. It was directed into the corner of the end zone and then sprinted across the end line to a camera platform.

For a second, the cat jumped on the platform and then sprang out. It finished its run along the end line before running up the tunnel to the cheers of the crowd.

MetLife Stadium was built by the Giants and Jets using private funds. It has been the home stadium of both NFL teams since 2010. It is owned by the MetLife Stadium Co., a joint venture of the teams.

In its statement, stadium officials denied a published report that said the 82,000-plus seat facility houses and feeds 300 cats.

"From time to time, we have seen cats on the complex and the Meadowlands Racetrack (located at the Meadowlands Sports Complex) has a TNR program in place and currently feeds approximately 30 barn cats," the statement said.