Jade Devis was given a treatment plan that included a lumpectomy and several rounds of chemotherapy, which both put her unborn baby at risk.

LOMA LINDA, Calif. - A California mother who was diagnosed with a rare type of breast cancer during her pregnancy has given birth to her miracle baby that survived the several rounds of chemotherapy she needed to stop the disease from spreading.

Jade Devis, 36, said it started with a hard lump that was allegedly dismissed by a radiologist as a pregnancy symptom, according to Loma Linda University Health (LLUH). She pushed for a biopsy, which revealed stage 2 triple-negative breast cancer. About 10-20 percent of cancers are triple-negative breast cancers, which means that the growth of the cancer is not fueled by the hormones estrogen and progesterone, or by the HER2 protein, so it will not respond to hormonal therapy medicines or those that target HER2 protein receptions, according to BreastCancer.org. 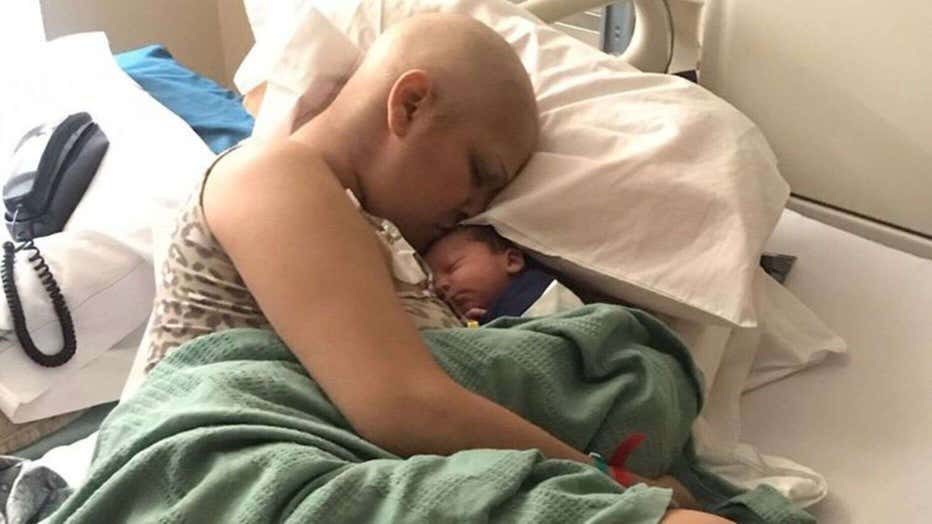 Jade Devis, pictured with her son, who was born in July, will finish her treatments in November. (Photo credit: Loma Linda University Health)

It’s considered to be more aggressive and have a poorer prognosis than other types of breast cancer, and is more likely to spread beyond the breast and more likely to recur after treatment. It’s also more likely to be diagnosed in people younger than 50, and in those who have a BRCA1 mutation.

"My baby boy is my miracle child."

Devis’, who was diagnosed while pregnant with her son, was given a treatment plan that included a lumpectomy and several rounds of chemotherapy, which both put her unborn baby at risk.

“I did not know how I felt about the pregnancy until I was told I should not continue my pregnancy,” she told LLUH. “That is when something rose up inside of me – I wanted to keep my baby because I would not allow a stranger to tell me my child’s fate.”

Under the care of Dr. Gayathri Nagaraj, a breast cancer specialist at Loma Linda University Cancer Center, Devis was watched by a pharmacist, dietitian, nurse, social workers, and high-risk obstetricians.

In July, she gave birth to a healthy baby boy.

“My baby boy is my miracle child,” Devis, who will finish her final treatments at the end of November, told LLUH. “It is surreal to remember that my pregnancy had an element of extraordinary fear. I am blessed when I look at my son, and I cannot ask for more than that.”