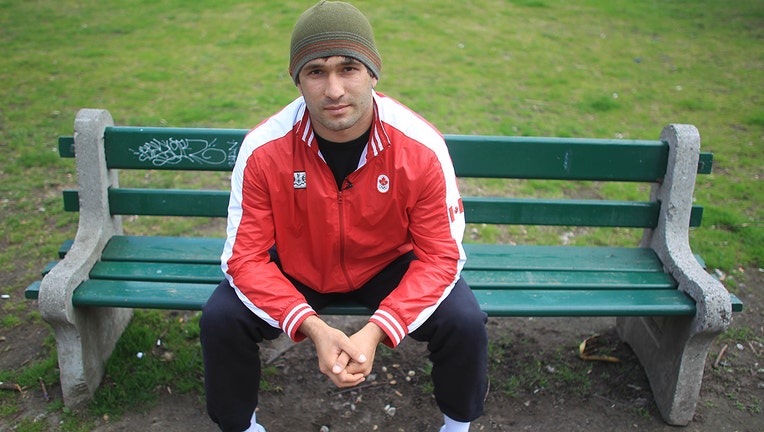 Olympic wrestler Khetag Pliev visits one of the benches at Allan Gardens that he used to sleep on. Originally from Russia the 96 kg wrestler was so down and out when he arrived in Canada that he slept on park benches in Toronto. April 16, 2012. (Phot

PHILADELPHIA - A mixed martial arts fighter had his finger severed during a match in Philadelphia, but doctors were eventually able to reattach it.

Khetag Pliev was injured Thursday night during the second round of his fight, which was stopped when the referee noticed Pliev was missing his left ring finger.

"In the second round, he (opponent Devin Goodale) caught my glove with one hand and held it," Pliev told ESPN. "I felt my finger snapped. He kept pulling my glove and my finger snapped. We kept fighting. When the second round was finished, I see my (bone) was out in the open. I wanted to keep fighting, because I felt like I had this guy. But the doctor saw that and stopped the fight. "

Event promoter Rob Haydak told ESPN that officials began searching inside the cage where the match was held, and an announcement was made to the crowd, asking them to look for it also.

After several minutes, the finger was ultimately discovered inside Pliev’s glove, Haydak said.

"It was crazy," Haydak told ESPN. "He didn’t even flinch. He was getting ready to do the (official) decision and I was like, ‘Uh, guys, get him out of the cage and go put his finger back on.’"

Pliev was taken to a hospital where the finger was reattached. He said the doctor told him he tore 50% of the tendon on the finger, and he may need another procedure.

His opponent, Goodale, was ruled the winner by TKO. Pliev, though, said he will appeal the decision to the Pennsylvania State Athletic Commission, claiming Goodale illegally grabbed his gloves during the bout.

Pliev, 37, is a native of Russia who competed in the 2012 Olympics as a wrestler for Canada.