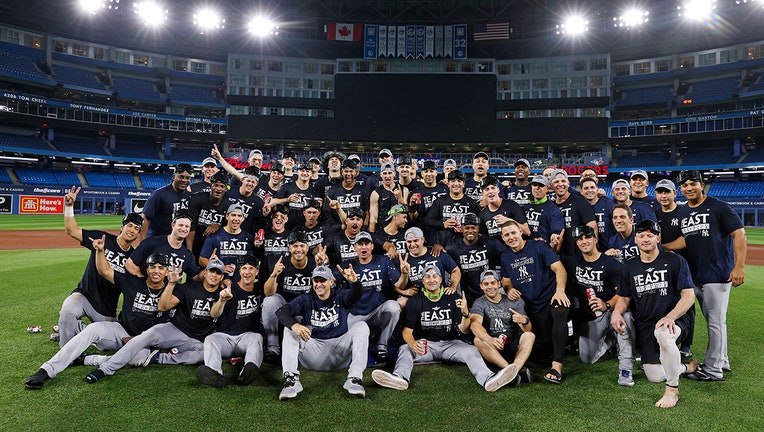 NEW YORK - The New York Yankees finished the 2022 regular season with a 99–63 record and the American League East title.

After a torrid first half in which they were on pace to win more than 110 games, the Yankees stumbled in the second half and fell one victory short of 100 wins. However, slugger Aaron Judge set a new AL record with 62 home runs and pitcher Gerrit Cole notched a new franchise record of 257 strikeouts.

The Bronx Bombers have now shifted their focus to winning the club's 28th World Series title. The Yankees' last trophy came in 2009 against the Philadelphia Phillies.

Where Are the Yankees Seeded?

By winning the AL East and having the second-best record among division winners, the Yankees are the No. 2 seed in the playoffs. They have a first-round bye and advance directly to the AL Division Series, for which they have home-field advantage.

"AL East champs — I mean, that's what we hope for in the regular season. We put ourselves in a good spot now. So I guess first mission accomplished in that regard, there's some satisfaction in that," manager Aaron Boone said. "But ... we want to win it all. And that's what we're focused on now."

Who Will the Yankees Play in the ALDS?

The Yankees will play the Cleveland Guardians (92–70 regular season) in the ALDS. The Guardians defeated the Tampa Bay Rays (86–76). The Yanks probably feel good about their chances: they're 5-1 against Cleveland this season. But anything can happen in a short series.

What Is the ALDS Schedule?

The ALDS is a best-of-five series.

Game 1 of the ALDS was on Tuesday, Oct. 11, at Yankee Stadium in the Bronx against Cleveland. UPDATE: The Yankees won 4-1.

Game 2 was rescheduled for Friday, Oct. 14, 1:07 p.m. at Yankee Stadium from Thursday due to weather.

What About the Yankees ALDS Roster?

Boone is handing the ball to Gerrit Cole for Game 1, Nestor Cortes for Game 2, and Luis Severino for Game 3.

Giancarlo Stanton will DH but could also work the outfield, although he hasn't played in the field since July.

Matt Carpenter returns from injury to DH and pinch-hit.

José Trevino and Kyle Higashioka are the backstops.

Where to Watch and Listen to the ALDS

This year, the NLDS and NLCS will air on either FOX 5 or Fox Sports 1 (FS1), and World Series will air on FOX 5.