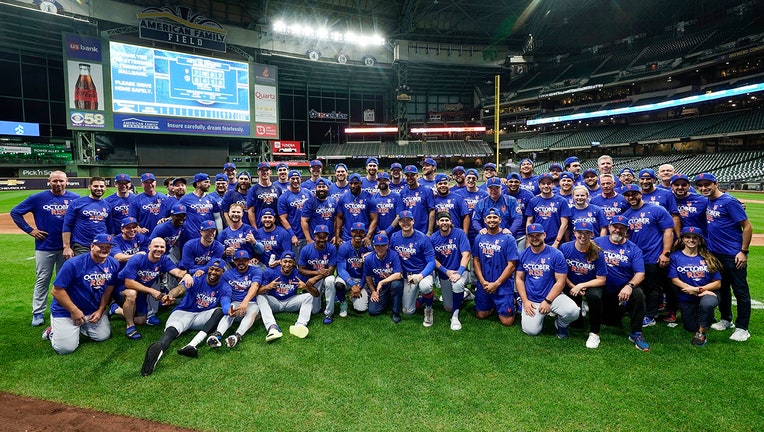 The New York Mets pose on the field after a game against the Milwaukee Brewers in Milwaukee, Monday, Sept. 19, 2022. They Mets clinched a spot in the postseason. (AP Photo/Morry Gash)

NEW YORK - The New York Mets finished the 2022 regular season with a 101–61 record and a playoff spot thanks to a wild card.

Although the Mets had the same record as their division rivals the Atlanta Braves, the Braves won the National League East title by having the better head-to-head record during the regular season. In June, New York was up by more than 10 games over Atlanta.

In just his first year as manager of the Mets, Buck Showalter becomes only the second manager in history to shepherd both the Mets and the Yankees into the playoffs. (The other manager to do so? Yogi Berra.) Showalter managed the Bombers to the ALDS in 1995; they lost to the Seattle Mariners.

This is the fourth time the Mets have won 100 or more games in a season.

Where Are the Mets Seeded?

With the best record among NL wild cards, the Mets are the No. 4 seed in the playoffs and have home-field advantage in the first round.

Who Will the Mets Play in the Wild Card Series?

The Mets will play the 5th-seeded San Diego Padres (89–73), who finished second in the NL West. In six regular-season matchups, the Padres bested the Mets 4–2.

What Is the Wild Card Series Schedule?

The wild card a best-of-three series with all games set for Citi Field in Queens.

If the Mets defeat the Padres, they would face the Los Angeles Dodgers, the AL West champions and the owners of the best regular-season record in baseball, 111–51.

Where to Watch and Listen to the Wild Card Series

Fans can watch the games on television on ESPN or listen on the radio on WCBS 880, WEPN 1050, or ESPN Radio.

This year, the NLDS and NLCS will air on either FOX 5 or Fox Sports 1 (FS1), and World Series will air on FOX 5.

What About the Mets Wild Card Roster?

Showalter hasn't released his roster yet but we already know Scherzer is getting the ball in Game 1. Jacob deGrom and Chris Bassitt will likely start, too.

Amazin' Avenue's Brian Salvatore has some predictions for the bullpen and lineup: