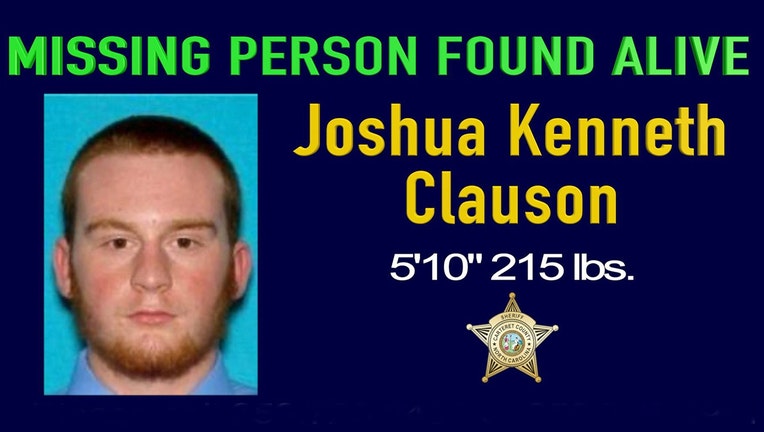 HAVELOCK, N.C. - A man who went missing in Croatan National Forest has been found alive after eight nights in the woods.

The Carteret County Sheriff’s Office announced Sunday that Joshua Clauson, 20, walked out of a wooded area near a home in Newport and the homeowner called authorities.

The coastal forest about 135 miles southeast of Raleigh is about 160,000 acres of forest, saltwater estuaries, raised swamps and bogs and is home to bears and venomous snakes.

Clauson was out for a walk May 29 with a family member when they got lost and then separated, officials said. The relative found his way out by following the sounds of passing vehicles, but officials said crews looked for Clauson from the air and on the ground for five days without success.

The search involving more than 200 trained search and rescue professionals was called off Thursday when crews became exhausted and conditions worsened. Sheriff Asa Buck said the dense vegetation in the area made it difficult for searchers to move around and to see very far on the ground.

Clauson was taken to a hospital in rough condition, but he’s expected to be okay.

Buck told WITN-TV that Clauson told detectives he was able to subsist off rainwater. Buck, who has been sheriff for almost 15 years, said this is the longest they’ve tried to find someone lost in the woods and his survival "might be a miracle."