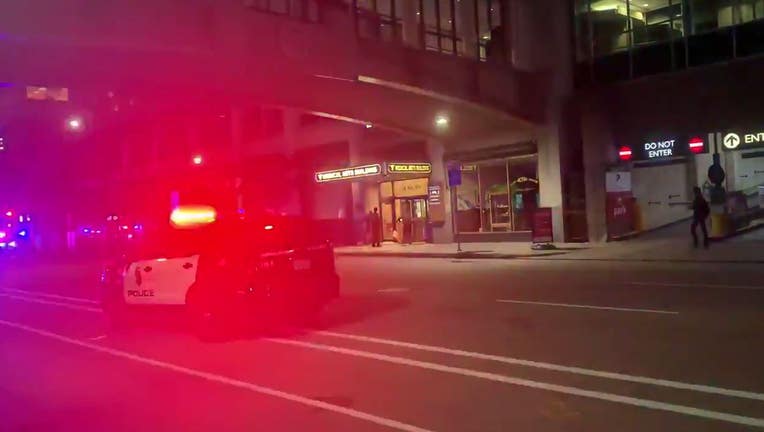 Minneapolis police are responding to looting in downtown Minneapolis.

MINNEAPOLIS (FOX 9) - The Minneapolis Police Department says two of its officers were seriously injured and hospitalized Wednesday night during a night of confusion, unrest, looting and damage downtown.

A department spokesperson said one the officer’s injuries are believed to be non-life threatening. The incident that injured the officer was caught on video Wednesday night as rioters downtown can be seen throwing a trash can lid at his head, striking him and sending him to the ground.

Police officer hit by trash can lid during Minneapolis unrest

In a press conference Thursday, Chief Medaria Arradondo said of the incidents, "We can't have that."

Another curfew was put into effect for overnight Thursday in an effort to stifle rioting or looting for second straight night.

The unrest started around 7 p.m. downtown after rumors circulated on social media that Minneapolis Police had shot and killed a man. Video released soon after showed the person who died on Nicollet Mall died by suicide. He was a suspect in a homicide from earlier in the day and shot and killed himself as officers closed in to arrest him.

Businesses across several parts of Minneapolis, including downtown, are assessing the damage Thursday morning after a night of unrest

The Governor held a press conference just before 11 p.m. calling for an end to the looting. Several south Minneapolis businesses were set on fire after that press conference, including Brit’s Pub and a Walgreen’s.

As of 1 a.m., the Minnesota State Patrol said six people had been arrested for burglary and two for violating curfew.