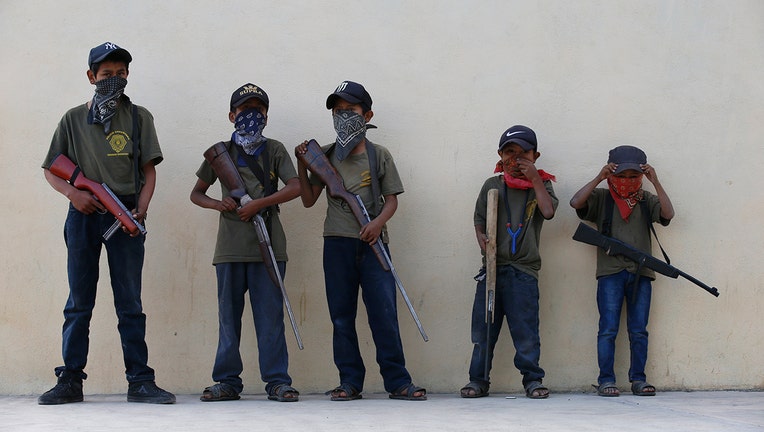 Children hold their training weapons, some real and some fake, during a display for the media designed to attract the federal government's attention to the dangers of organized crime their town negotiates daily in Ayahualtempa, Guerrero state, Mexico

AYAHUALTEMPA, Mexico - The children in this mountain village usually spend their days caring for goats or cows and playing with their dogs.

But on the rare occasions that the press comes to Ayahualtempa, the kids are lined up and handed guns.

They pull on the shirts of a community police force, cover their faces with handkerchiefs, grab their guns — fake wooden ones for the youngest — and line up in formation on the town’s basketball court to pose and march for the cameras.

The images have shocked people across Mexico and beyond. And that’s the point.

Politicians keep getting killed in Mexico

Few of those children actually wield guns on patrol, but such displays here and in other oft-forgotten communities are desperate attempts to attract the federal government’s help to fend off organized criminals.

"They are the poster children for a country at war that doesn’t speak of war," said Juan Martín Pérez, director of the Network for Children’s Rights in Mexico.

The remote region of Guerrero state is one of Mexico’s poorest and one of its most violent. It’s a key corridor for drug production and transit, especially heroin from opium poppies. Communities of the ethnic Nahua like Ayahualtempa are caught between warring criminal bands and suffer kidnappings, extortion and murders.On a recent afternoon, four boys cared for goats and played with puppies on a slope looking out over mountaintops running to the horizon. 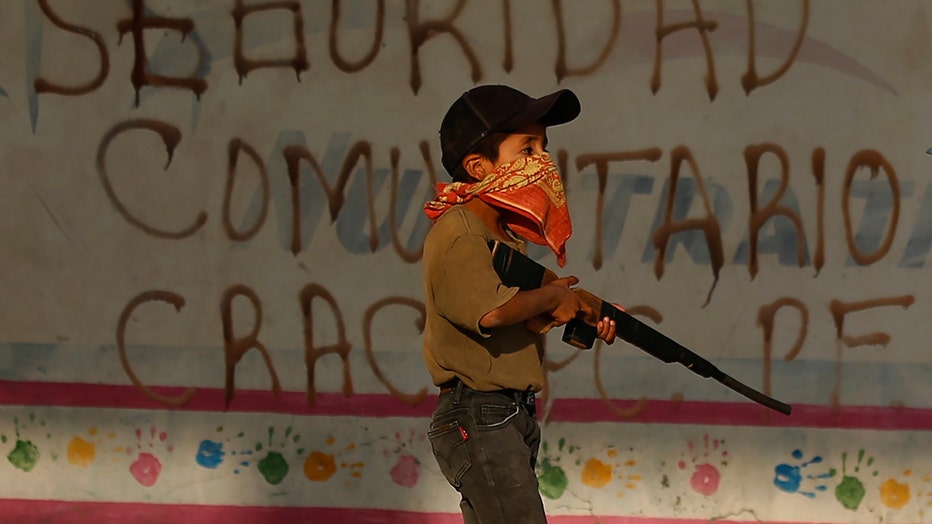 A child practices with a fake, wooden rifle during a display for the media in an attempt to attract the federal government's attention to the dangers his town faces from organized crime in Ayahualtempa, Guerrero state, Mexico, Wednesday, April 28, 20

Asked about training with guns, the oldest, 12-year-old Valentín Toribio said now they only march "when the reporters are going to come and interview us."

"It’s so the president sees us and helps us," he said.

But there is at least some real training, too.

Valentín said he had liked learning to fire a gun and hopes to become a policeman when he gets older. His older brother taught him to shoot, though he normally only holds a gun for the performance. "When I’m older I’ll carry the gun because (now) it can be dangerous," he said.

His 11-year-old cousin, Geovanni Martínez, is less interested in the performance because he is too busy. "I take care of the goats, then I go to my pigs and then to give water to Filomena," his donkey, he said. If there’s any free time, he plays basketball. He yearns to return to school, closed for the past year by the pandemic.

Asked if he would shoot at an enemy, he issued a convincing, "No!"

A short time later, three of the four joined about a dozen others in a display for visiting reporters. They marched a bit and displayed firing positions from one knee, seated and flat on their stomachs.

Clemente Rodríguez, 10, didn’t participate because he said his mother would not approve. His only weapons were two slingshots dangling around his neck.

The day’s display was less militant than one a few weeks earlier, when some three dozen children marched out of town and fired weapons into the air while shouting slogans against the gang that terrorizes them — Los Ardillos, "the Squirrels."

The town’s demands include more National Guard troops and help for orphans, widows and those displaced by violence that has cost 34 lives in several nearby communities over the past two years.

Only a few of the children in the village, which has more than 1,000 residents, actually take part. They are all boys; a girl who wanted to participate was barred from doing so. Most are sons or brothers of members of the town’s community police force, guarding the entrances to the town with old shotguns.

The threats residents fear are real, and regional authorities are often suspect. Guerrero is the state where 43 students from a teachers' college disappeared in 2014 at the hands of local police and state and federal authorities working with a drug gang.

Around Ayahualtempa, the Ardillos gang is battling with Los Rojos — "the Reds" — and many communities have formed their own forces. But leadership disputes and gang infiltration have fractured those forces and many people struggle to identify who is on which side.

The result, says Abel Barrera, founder of local human rights group Tlachinollan, has set local people against one another while the government does nothing to stop the violence or solve other deep problems.

"We’ve normalized that these children don’t eat, are illiterate, are farm workers," he said, and mocked the outrage that outsiders feel at seeing children carrying guns: "We’re used to the ‘Indians’ dying young, but, ‘How dare they arm them!’"

Bernardino Sánchez Luna, co-founder of a vigilante coalition, said authorities did nothing when gang members once attacked the community of Rincon de Chautla in the same region. That prompted the group to distribute a video in 2019 of children performing military-style drills with sticks.

Asked why, he said, "Because they didn’t pay attention!"

Sánchez Luna said the government wound up donating some housing material for the displaced, but the violence continued.

Another performance came in January 2020 in Alcozacan — a 30-minute drive from Ayahualtempa — prompted by the slaying of 10 musicians from the town. The victims, including a 15-year-old boy, were burned and their vehicles sent off a cliff.

After 17 children paraded for the cameras with real guns, the community was given scholarships for the victims’ orphaned children and houses for the widows.

But just two months later, a couple and their two young daughters were killed in a nearby community, infuriating residents again.

An April 10 display in Ayahualtempa – the more aggressive one in which children fired in the air - came just two months before major midterm elections in Mexico that could define the remaining three years of President Andrés Manuel López Obrador’s administration. It was an expression of concern about violence that often increases during political campaigns.

The president noticed. López Obrador condemned the exploitation of children and said he believed Mexico had made a mistake in allowing self-defense for Indigenous communities. Criminals had taken advantage of the legalization of so-called community police forces to create their own armed groups, he said.

"The government has to guarantee public safety," he said. "If there are gaps, they are filled," but with the National Guard.

However, the government didn’t immediately send aid or bolster security, people in the village say.

International organizations have responded to the displays with condemnations of the "recruitment" of children and warned of the effects.

But Barrera, the rights activist, said of the communities: "They see that the issue of the children is effective for making people take notice and they think: If that’s what works, we’ll have to keep doing it."

National Guard troops have a checkpoint on the road connecting the communities to Chilapa — the nearest sizable town — and the army has another nearby. Farther up the road, there are other armed men, whom locals identify as Ardillos.

Residents say that when the criminals are on the move, federal forces look the other way.

Three miles (five kilometers) outside Ayahualtempa, the ghost village of El Paraiso de Tepila is a reminder of what can happen. All 35 families who lived there fled. More than two years later, no one has returned. The exterior of the school that faces the road is pocked with bullet holes.

Nearly two years ago, when Ayahualtempa itself was under siege, Luis Gustavo Morales couldn’t safely travel the kilometer (half mile) from home to his middle school. That was when his parents began to have him train with a gun.

Now 15, Luis Gustavo says he always carries a pistol. Chambering a bullet and unloading it in front of journalists, he appears comfortable with the weapon. He is the only boy who joins his father every 16 days for shifts guarding the town entrance.

Community police say teaching their children to defend their homes with guns is different from the exploitation of children by profit-seeking criminal gangs.

Luis Gustavo’s father, Luis Morales, said that at first it made him sad to train his son to defend the town, but now he is proud because the boy will know how. Still, he planns to send him back to school if Ayahualtempa becomes safe again.

The last march of armed children happened April 30 — Children’s Day in Mexico — in nearby Alcozacan.

Some 20 media outlets showed up, many of them international. But this time there were no guns — only toys and slogans about justice and demands for safety. Children also chanted against guns and drugs.

Satisfied, the local organizers smiled wryly. The media had turned up for the show, which unfolded without accusations from the government that the community is endangering its children.

But people in Ayahualtempa say they plan to keep displaying armed children until they feel safe. As young Valentín noted, "There are a lot of bad men who want to hurt us."