CLEARWATER, Fla. - Memorial plans for Winter the dolphin are coming together in Clearwater, a few days after she unexpectedly passed away.

The Clearwater Marine Aquarium says there will be several events, both public and private, for fans to say goodbye to the inspiration behind ‘Dolphin Tale.’

On Saturday, November 20, a private early-morning ceremony will be held on Clearwater Beach for all active CMA staff, interns, and volunteers. Later that day, a four-day public celebration of life starts at the aquarium.

"Guests are invited to bring their memories of Winter and to enjoy the beautiful home she helped Clearwater Marine Aquarium build for her and all non-releasable animals," CMA staff wrote on the aquarium blog. 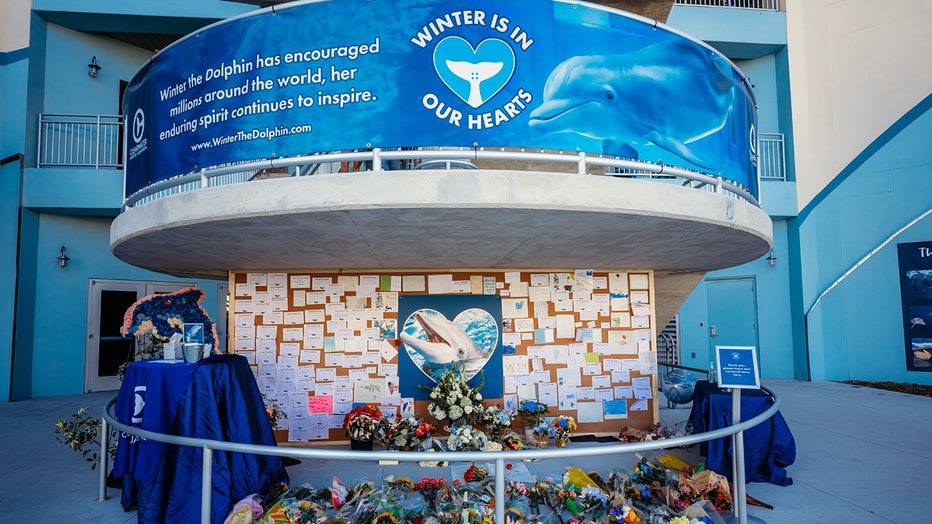 Saturday and Sunday, admission to CMA will be reduced to $16 in honor of Winter’s 16 years of life. The aquarium plans flower arrangements and visual tributes to Winter as well as "increased guest interaction" and a special presentation schedule all focused on Winter’s life and legacy.

Original footage of Winter’s rescue, her life and those she touched through her inspiring story will also be shown in the Dolphin Tale theatre throughout each day.

Saturday evening, a memorial will be held for the aquarium’s community partners and local elected officials. While private, it will be live-streamed on the CMA website.

The aquarium says anyone unable to attend the events in person is invited to join online at RememberingWinter.com.

David Yates took the helm at Clearwater Marine Aquarium weeks after Winter the dolphin was rescued from a crab trap. He speaks to FOX 13's Cynthia Smoot about her inspirational story, her prosthetic tail, and how the "Dolphin Tale" movie came to be.

Winter was discovered entangled in a crab trap line in a Florida lagoon when she was just two months old. She lost her tail as a result of her injuries and had become a fixture at the Clearwater Marine Aquarium since 2005.

A team of experts developed a first-of-its-kind prosthetic tail for Winter. She adapted to it, made a complete recovery, and learned to swim like other dolphins. Her story was inspirational to many humans who face challenges with prosthetic limbs.

Winter died Thursday night in the arms of her caretakers. A necropsy later revealed that her intestines had become twisted and blood supply was cut off.

"It was not an operable location and there was nothing we could have done," offered veterinarian Dr. Shelley Marquardt.