After the ballots were counted, Harris became the country’s first Black and first female second-in-command.

WASHINGTON - Kamala Harris’ projected election as vice president means a lot of firsts for the California senator. She will be the first Black American, first woman and first person of South Asian descent elected to the position. And her husband, Doug Emhoff, will be America’s first-ever second gentleman.

Emhoff congratulated his newly elected wife on social media Saturday after Joe Biden was projected as the winner of the presidential race by FOX News and the Associated Press, posting an image on Twitter of their celebratory hug.

“So proud of you,” he wrote alongside heart and American flag emojis.

Emhoff, 56, will also be the first person of Jewish faith to be tied to a winning presidential ticket.

“Doug, you're gonna have to learn what it means to be a barrier breaker yourself in this job,” former Vice President and new President-elect Biden said when addressing the nation Wednesday night before the race was called.

Emhoff is a native of Brooklyn who attended California State University-Northridge and later the USC Gould School of Law. He opened his own law firm in 2000 before it was acquired by Venable in 2006. 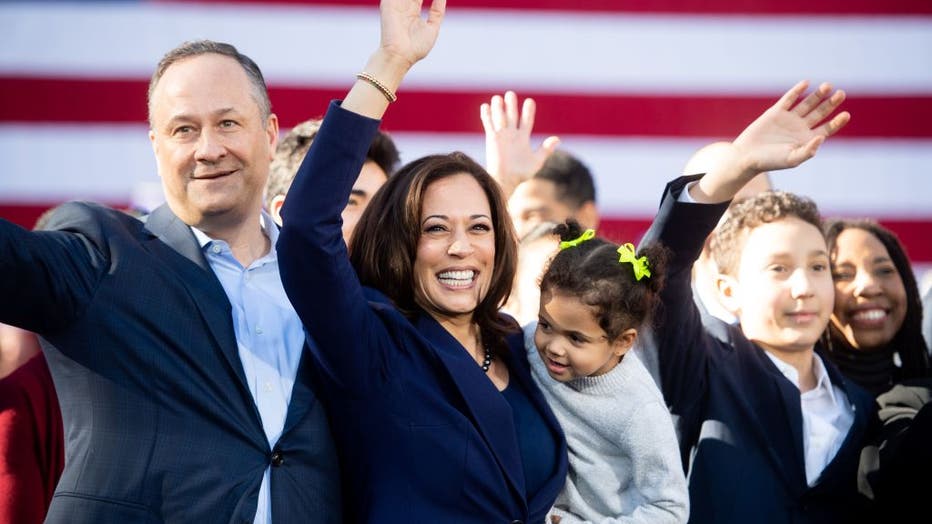 California Senator Kamala Harris waves next to her husband Douglas Emhoff (L) during a rally launching her presidential campaign on January 27, 2019 in Oakland, California. (Photo by NOAH BERGER/AFP via Getty Images)

Harris and Emhoff were set up by her close friend Chrisette Hudlin on a blind date in 2013, while Harris was serving as California’s attorney general. In her memoir, “The Truths We Hold,” Harris wrote about the challenges of dating in the public eye, acknowledging that “dating wasn’t easy” and that “single women in politics are viewed differently than single men.”

The couple got engaged in 2014 and married at the courthouse in Santa Barbara, California, later that year. The ceremony was officiated by Harris’ sister, Maya, who became the chair of Harris’ presidential campaign.

Emhoff has two children from a previous marriage, Cole and Ella. In her memoir, Harris wrote about her friendship with his first wife, Kerstin, saying that “we sometimes joke that our modern family is almost a little too functional.”

He describes himself in his Twitter profile as “dad, @kamalaharris hubby, lawyer, wannabe golfer, advocate for justice and equality.”

Throughout Harris’ campaign, Emhoff largely kept a low profile until a viral moment put him in the spotlight when in June he helped remove a protester from the stage who rushed Harris.

Shortly after the incident, Emhoff tweeted that he and Harris were “good” and that he would “do anything for her.”

He slowly gained more national attention when he made his first solo appearance since Harris launched her campaign for the Democratic presidential primary in January. In June, he spoke at the Florida Democratic Party’s Leadership Blue Gala in Orlando.

Emhoff’s increasingly public role was a reminder of the historic diversity of the Democratic field at the time, which included a half dozen women as well as an openly gay man. And coming three years after Hillary Clinton became the first woman to be a major party’s presidential nominee, it shows how the role of political spouses is evolving and produced America’s first “first gentleman.”

Emhoff said in an interview with The Hollywood Reporter in March that he planned to continue working for his law firm, which also has offices in Washington, D.C.

"With all this other stuff that's happening in my life right now, it's great to have [my practice,] because it's something that I love and I'm good at," he said.