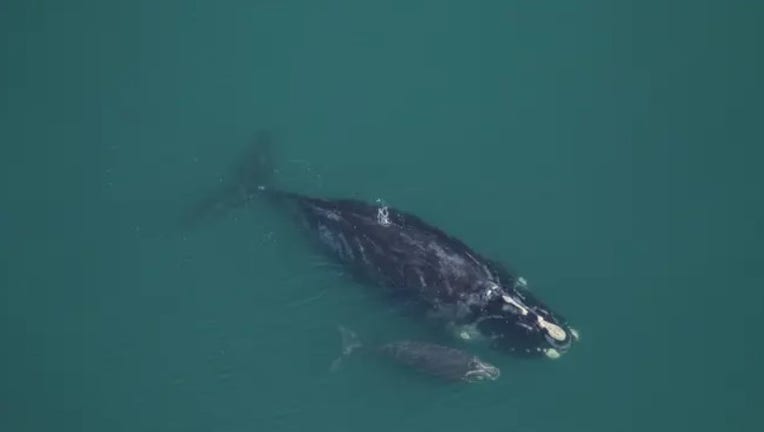 The Clearwater Marine Aquarium Research Institute said its team spotted a mother and her calf about 11 miles east of Ossabaw Island.

Spectacular video taken from a plane showed the adult whale swimming alongside what is thought to be her seventh known calf.

The mother, nicknamed "Medusa," is believed to be one of around 75 breeding females alive in the Atlantic Ocean.

"Through aerial surveys, the CMARI team works together to protect the species," said Dr. James Powell, President and Executive Director of CMARI. "Recovery had been slow and steady until 2010, when we started to see a decline. Most recent population models show that the numbers are declining again for various reasons, including a slow reproduction rate, threats from entanglement in fishing gear, collisions with large vessels, and possibly other factors not yet identified."

SHARKS AND TARPONS AND MANATEES, OH MY!

The pair appeared to be in good condition, and researchers said they used a boat to collect skin samples for DNA analysis.

The National Oceanic and Atmospheric Administration considers the region off the Southeast coast to be primary calving grounds for the giant mammals.

Biologists said the season typically begins in mid-November and can run as late as April. Around 16 calves are born every year, according to NOAA data.

At last report, there were only thought to be around 350 North Atlantic right whales in existence - down from a population of more than 480 in 2011.

Since 2017, the whales have been experiencing an Unusual Mortality Event that experts believe is being driven by rope entanglements and vessel strikes.

NOAA Fisheries is in the process of increasing boating restrictions along the U.S. East Coast that it believes will reduce the likelihood of deadly collisions with ships.

Modifications to marine rules are still under review and won’t likely be enacted until sometime in 2023.

Read more of this story from FOX Weather.