EL SEGUNDO, Calif. - Mattel, the maker of Barbie, has unveiled several new dolls in its effort to represent diversity and inclusivity in the doll aisle this year.

Among the new dolls in Barbie’s 2020 Fashionistas collection is a doll with the skin condition vitiligo, which causes pigmentation loss, as well as a Barbie doll with no hair.

Two other new dolls in the lineup include one with darker skin using a gold prosthetic limb, and the first ever Ken doll with long, rooted hair.

Mattel said its Barbie Fashionistas line has evolved over the past five years to be “more reflective of the world girls see around them,” and has introduced more than 170 looks. The dolls represent nine different body types, 35 different skin tones and 94 different hairstyles, the company said. 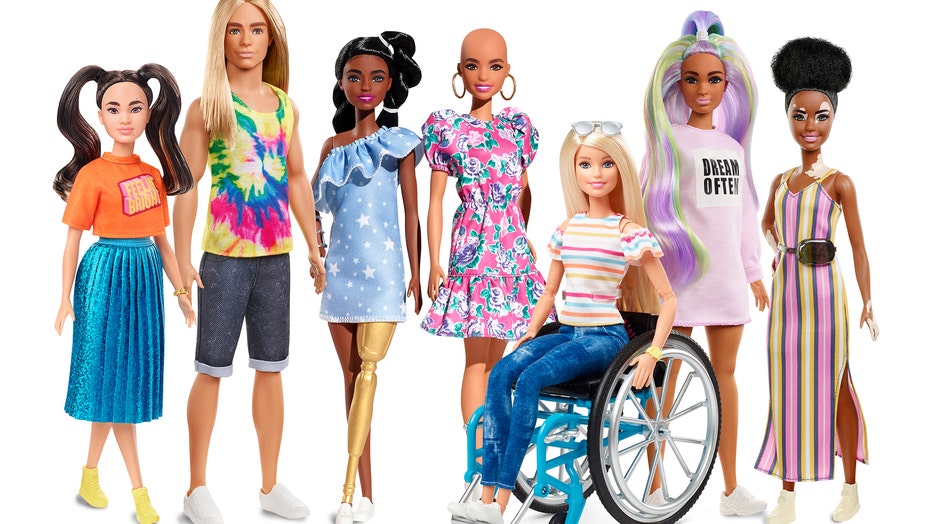 New dolls in Barbie’s 2020 Fashionistas lineup include a Ken doll with long, rooted hair, a doll with darker skin and a gold prosthetic limb, a doll with no hair and a doll with the skin condition vitiligo. (Photo credit: Mattel)

To create the doll with vitilgo, Barbie worked with a dermatologist to ensure the condition was accurately represented, according to a press release from Mattel. The doll with no hair helps girls who may be experiencing hair loss for any reason to see herself reflected in the line, the company said.

In 2019, Barbie introduced dolls with permanent disabilities as part of its Fashionistas line, including a doll with a prosthetic limb. The company worked with then 12-year-old Jordan Reeves, who co-founded Born Just Right, a nonprofit which aims to develop “creative solutions to help kids born with differences live a more enjoyable life.”

Barbie expanded its 2020 lineup with a second doll that uses a prosthetic limb and has a darker skin tone.

Mattel said of its top 10 best-selling dolls in the Fashionistas line for 2019, seven were diverse — including the doll that uses a wheelchair. The top selling doll for almost every week in 2019 was a curvy black Fashionista doll with an afro hairstyle, the company revealed.

RELATED: Barbie takes on new role as judge to inspire girls to dream of judicial careers