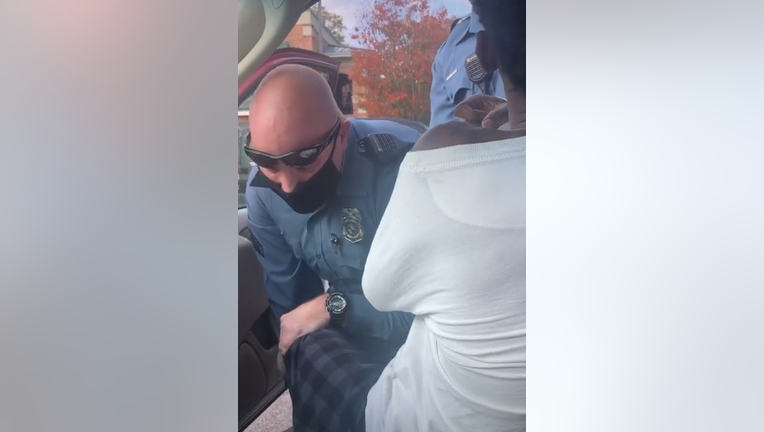 Anne Arundel police detain a black man for not showing his ID during a traffic stop. He was a passenger, not the driver (TikTok/HeatherJanney)

ANNE ARUNDEL COUNTY, Md. -  A viral TikTok video shows police in Anne Arundel County arresting a black man for refusing to show his ID while sitting as a passenger during a traffic stop.

You can hear police say in the video that they pulled over the driver, who posted the video Friday, for going 45 miles-per-hour in a 30 mile-per-hour zone.

The man, identified by police as Antoine Wedington, refuses to provide his ID when asked, saying he doesn't have to as a passenger in the car.

Police then attempt to pull Wedington out of the car.

Police denied wrongdoing when asked about the incident by FOX 5 DC.

They say Wedington was wanted under two warrants: one for failure to appear in court, and a retake warrant from the parole commission. Officers say they recognized Wedington during the traffic stop.

Police say they arrested Wedington around 3:15 p.m. Oct. 19 near Shady Side and Deale roads in Churchton, Maryland. He was also charged with resisting arrest.

The TikTok video has sparked outrage on social media as the conversation surrounding police brutality continues in the wake of George Floyd's death.

FOX 5 has reached out to Janney. She told TMZ that the couple plans to take legal action.