March for Our Lives rally 2022

A man whose mom was killed in the Buffalo grocery store massacre said "enough is enough" as thousands gathered at the nation's capital for the March for Our Lives rally.

WASHINGTON - Thousands of people rallied on the National Mall and across the United States on Saturday in a renewed push for gun control measures after recent deadly mass shootings from Uvalde, Texas, to Buffalo, New York, that activists say should compel Congress to act.

"Enough is enough," District of Columbia Mayor Muriel Bowser told the second March for Our Lives rally in her city. "I speak as a mayor, a mom, and I speak for millions of Americans and America's mayors who are demanding that Congress do its job. And its job is to protect us, to protect our children from gun violence."

Speaker after speaker in Washington called on senators, who are seen as a major impediment to legislation, to act or face being voted out of office, especially given the shock to the nation's conscience after 19 children and two teachers were killed May 24 at Robb Elementary School in Uvalde. 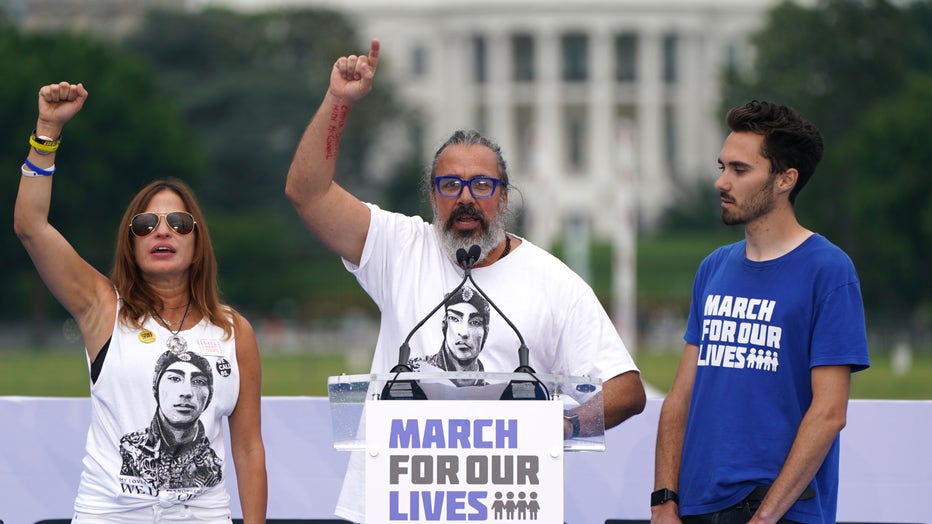 "If our government can't do anything to stop 19 kids from being killed and slaughtered in their own school, and decapitated, it's time to change who is in government," said David Hogg, a survivor of the 2018 shooting that killed 17 students and staff at Marjory Stoneman Douglas High School in Parkland, Florida.

A co-founder of the March For Our Lives organization that was created after that shooting and held its first rally in Washington not long afterward, Hogg led the crowd in chants of "Vote them out."

Another Parkland survivor and group co-founder, X Gonzalez, delivered an impassioned, profanity-laced plea to Congress for change. "We are being murdered," she screamed and implored Congress to "act your age, not your shoe size." 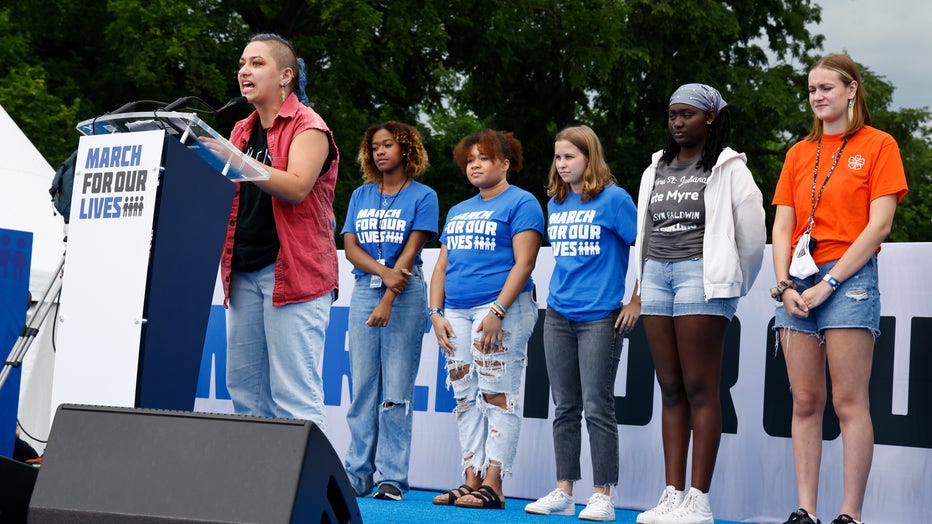 WASHINGTON, DC - JUNE 11: X Gonzalez speaks during March for Our Lives 2022 on June 11, 2022 in Washington, DC. X Gonzalez is a survivor from the Marjory Stoneman Douglas mass shooting in 2018 and a co-founder of March For Our Lives. (Photo by Paul M

Added Yolanda King, granddaughter of Martin Luther King Jr.: "This time is different because this isn’t about politics. It’s about morality. Not right and left, but right and wrong, and that doesn’t just mean thoughts and prayers. That means courage and action."

Manuel Oliver, whose son, Joaquin, was killed in the Parkland shooting, called on students "to avoid going back to school until our elected leaders stop avoiding the crisis of gun violence in America and start acting to save our lives."

Hundreds gathered at an amphitheater in Parkland, where Debra Hixon, whose husband, high school athletic director Chris Hixon, died in the shooting, said it is "all too easy" for young men to walk into stores and buy weapons.

"Going home to an empty bed and an empty seat at the table is a constant reminder that he is gone," said Hixon, who now serves as a school board member. "We weren’t done making memories, sharing dreams and living life together. Gun violence ripped that away from my family."

President Joe Biden, who was in California when the Washington rally began, said his message to demonstrators was "keep marching" and added that he is "mildly optimistic" about legislative negotiations to address gun violence. Biden recently delivered an impassioned address to the nation in which he called for several steps, including raising the age limit for buying assault-style weapons.

March for Our Lives rally: Co-founder says 'we are all pro peace'

Thousands of protestors rallied in Washington, D.C. Saturday as part of a renewed push for nationwide gun control.

In the Brooklyn borough of New York, Mayor Eric Adams, who campaigned on reining in violence in the nation’s largest city, joined state Attorney General Letitia James, who is suing the National Rifle Association, in leading activists on a march toward the Brooklyn Bridge.

"Nothing happens in this country until young people stand up — not politicians," James said.

Joining the call for change were hundreds of people who rallied in a park outside the courthouse in Portland, Maine, before they marched through the Old Port and gathered outside of City Hall. At one point, they chanted, "Hey, hey, hey, NRA, how many kids have to die today."

John Wuesthoff, a retired lawyer in Portland, said he was waving an American flag during the rally as a reminder that gun control is "not un-American." 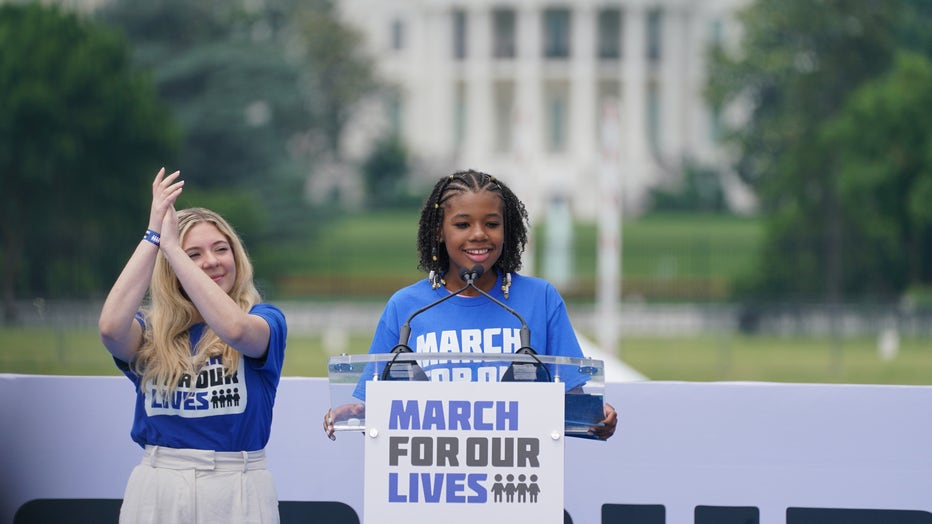 WASHINGTON, DC - JUNE 11: Yolanda King speaks during March for Our Lives 2022 on June 11, 2022 in Washington, DC. Yolanda King is the granddaughter of Martin Luther King Jr., and a young activist against gun violence. (Photo by Leigh Vogel/Getty Imag

"It’s very American to have reasonable regulations to save the lives of our children," he said.

RELATED: ‘We’re going to be heard’: Gun reform takes center stage at 'March for Our Lives' rallies across Bay Area

The passion that the issue stirs was clear in Washington when a young man jumped the barricade and tried to rush the stage before being intercepted by security. The incident caused a brief panic as people began to scatter.

Organizers hoped the second March for Our Lives rally would draw as many as 50,000 people to the Washington Monument, though the crowd seemed closer to 30,000. The 2018 event attracted more than 200,000 people, but the focus this time was on smaller marches at an estimated 300 locations. 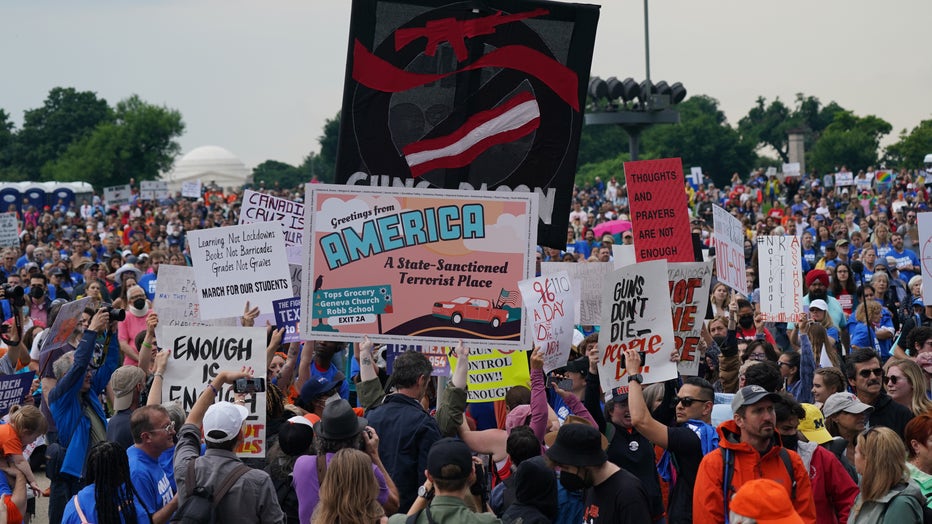 The youth-led movement created after the Parkland shooting successfully pressured the Republican-dominated Florida state government to enact sweeping gun control changes. The group did not match that at the national level, but has persisted in advocating for gun restrictions since then, as well as participating in voter registration drives.

Survivors of mass shootings and other incidents of gun violence have lobbied legislators and testified on Capitol Hill this week. Among them was Miah Cerrillo, an 11-year-old girl who survived the shooting at Robb Elementary. She described for lawmakers how she covered herself with a dead classmate’s blood to avoid being shot.

The House has passed bills to raise the age limit to buy semi-automatic weapons and establish federal "red flag" laws. A bipartisan group of senators had hoped to reach agreement this week on a framework for addressing the issue and held talks Friday, but no deal was announced.