Manhattan DA not running for re-election

For over a decade, Cy Vance has been Manhattan's District Attorney, but Friday he announced that it's time for new leadership in his office.

NEW YORK - The veteran New York City prosecutor overseeing a criminal investigation into former President Donald Trump said Friday that he will not seek re-election, opting against a primary fight with progressive candidates who say he's a relic unfit for the reform era.

Manhattan District Attorney Cyrus Vance Jr. made the announcement in a memo to his staff, ending months of speculation about his future. His term expires at the end of the year.

Vance, a Democrat, counted Harvey Weinstein's rape conviction a year ago among his crowning achievements but faced withering criticism over other high-profile cases, including dropping rape charges against French financier Dominique Strauss-Kahn in 2011 and declining to prosecute Ivanka and Donald Trump Jr. over fraud allegations in 2012.

"I never imagined myself as District Attorney for decades like my predecessors. I never thought of this as my last job, even though it’s the best job and biggest honor I’ll ever have. I said twelve years ago that change is fundamentally good and necessary for any institution," Vance wrote in a statement about his decision.

Vance’s decision not to run for re-election was widely anticipated, but he held off on making it official while the U.S. Supreme Court was weighing whether his office could obtain Trump’s tax records. The court ruled in Vance’s favor last month.

Vance, 66, raised little money this election cycle and stayed curiously quiet as other Democrats campaigned to replace him. Eight candidates are on the ballot for the party’s June primary, an election that will likely decide Vance’s successor because Manhattan is so heavily Democratic.

"I never imagined myself as District Attorney for decades like my predecessors. I never thought of this as my last job, even though it’s the best job and biggest honor I’ll ever have. I said twelve years ago that change is fundamentally good and necessary for any institution," Vance wrote in a statement about his decision.

The Feb. 22 Supreme Court ruling giving Vance's office access to Trump's taxes was a capstone for his tenure as district attorney, ending an 18-month fight with the former president’s lawyers and bolstering a grand jury investigation that has drawn worldwide attention.

Vance is conducting a wide-ranging investigation that includes examining whether Trump or his businesses lied about the value of assets to gain favorable loan terms and tax benefits and hush-money payments paid to women on Trump’s behalf.

Vance will continue to lead the Trump probe through the end of this year with his general counsel, Carey Dunne, who made appeals court arguments on the office's behalf. He recently hired former mafia prosecutor Mark Pomerantz to assist in the probe. In a statement after the Supreme Court ruled, Vance said: "The work continues." 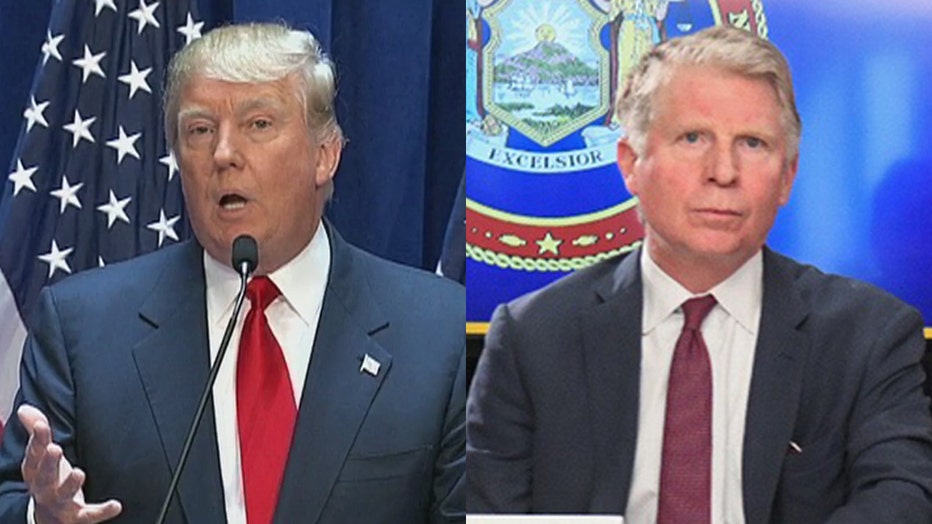 Vance’s exit, however, means it will almost certainly be a brand-new D.A. who sees the Trump case through. And, in the short term, legal observers say, his announcement could hasten the departure of prosecutors who've been loyal to him and won't want to work for his successor.

Vance’s successor will be just the fourth elected district attorney in Manhattan in the last 80 years. Frank Hogan, the namesake of the street where the office is located, served for 31 years. Robert Morgenthau was in office for 34 years, and Vance will leave after 12.

It’s one of the most high-profile prosecution jobs in the world, dramatized on TV’s "Law and Order" and "Blue Bloods." The district attorney oversees a staff of 500 lawyers and has a budget of about $125 million.

A separate forfeiture fund bankrolled by Wall Street settlements and worth more than $800 million is used for grants to criminal justice and community organizations and big initiatives, like testing backlogged rape kits — a push celebrated by the likes of "Law & Order: SVU" star Mariska Hargitay.

Vance, whose father was President Jimmy Carter's secretary of state, served as an assistant district attorney under Morgenthau in the 1980s. Practicing law in Seattle for 16 years, he represented Vili Fualaau, who as a preteen became involved in a sexual relationship with his sixth-grade teacher, Mary Kay Letourneau, and fathered two of her children.

Vance returned to New York in 2004 and was elected district attorney five years later. Running as a death penalty opponent, he was buoyed by endorsements from Morgenthau and former Mayor David Dinkins.

Vance positioned himself as a national criminal justice innovator, taking interest in national and global efforts to prevent cyberattacks and gun violence. He has testified before Congress about cellphone encryption and financial transparency.

After Vance made a campaign pledge to re-examine the 1979 disappearance of 6-year-old Etan Patz, a 2012 tip led to a new suspect and ultimately a conviction.

Weinstein’s conviction in the landmark #MeToo case last year boosted Vance’s lagging legacy, giving him a career-defining win a decade into a tenure clouded by concerns that he repeatedly gave powerful people special treatment, such as sidestepping an effort to pursue charges against Weinstein in 2015.

In addition to Strauss-Kahn, whose charges were dropped amid concerns about inconsistencies in the account of the hotel maid who accused him, a Vance prosecutor once took the unusual step of seeking low-level sex offender status for Jeffrey Epstein, alarming the judge who said she had "never seen a prosecutor’s office do anything like this." Vance's office also struck a deal in 2016 so well-connected gynecologist Robert Hadden could avoid prison for allegedly sexually abusing patients.