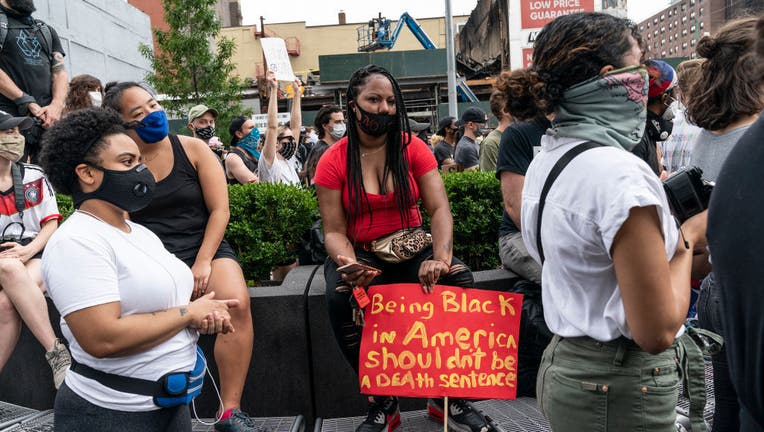 Protesters gathered for memorial for Breonna Taylor killed by police on her 27th birthday at African Square on Adam Clayton Powell Jr boulevard in Harlem. (Photo by Lev Radin/Pacific Press/LightRocket via Getty Images)

People were peacefully gathering on the overpass above the Cross Island Parkway when Frank Cavalluzzi, 54, jumped out of a vehicle Tuesday afternoon, shouting “I will kill you,” and chasing protesters while wearing the knife-claw glove, a press release from the office of District Attorney Melinda Katz said.

He then got back into his vehicle and drove on a sidewalk, nearly running over the demonstrators, the release said.

Demonstrators protesting over the death of George Floyd had been in the area hanging up Black Lives Matter signs and rallying after someone earlier this week was caught on camera ripping one down at the location, the New York Post reported. Floyd, a black man, died on Memorial Day after a white Minneapolis police officer pressed his knee onto the back of Floyd's neck.

Cavalluzzi turned himself in Thursday morning and was arraigned on charges of second-degree attempted murder, multiple degrees of attempted assault, reckless endangerment and other offenses.

The judge set bail at $100,000. Cavalluzzi faces up to 25 years in prison if convicted, the release said. It was unclear Thursday night whether Cavalluzzi had retained an attorney.

“In a burst of anger and rage, this defendant allegedly sought to kill protesters who were peacefully assembled and exercising their right to free speech,” Katz said, adding that it was “amazing” no one was injured.