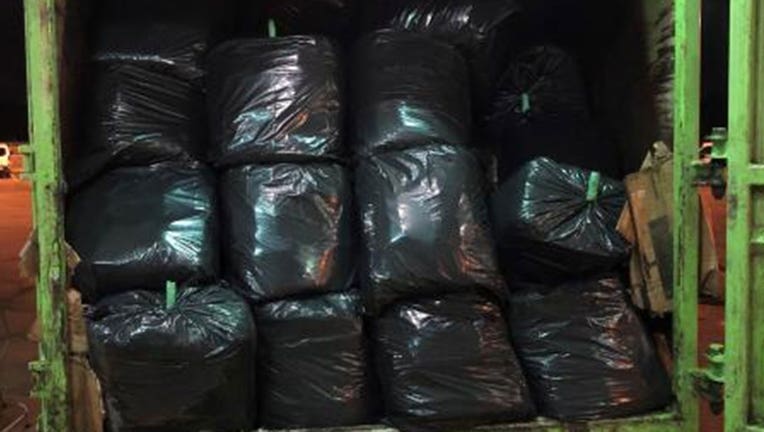 Authorities found bags of marijuana in a trash truck. (Customs and Border Protection)

NEW YORK - Customs officials say they caught a trash truck driver trying to smuggle in 1,000 pounds of marijuana into the country disguised as trash headed to a landfill.

The U.S. Customs and Border Protection agency says it happened at approximately 11:15 p.m. at the Blue Water Bridge in Michigan.

They say the trash truck's driver said he was transporting municipal trash destined for a landfill in New Boston, Michigan.

The officer working at the primary inspection booth referred the driver for a secondary inspection.  Officers then uncovered the trash bags filled with marijuana.

secondary examination. During the exam of the hauler, officers uncovered over 1,000 pounds of marijuana concealed in trash bags in the rear of the truck.

"Traffickers will use any means to attempt to transport illegal narcotics across our borders," said Acting Port Director April Donaghy, who oversees operations at the Port Huron Area Port of Entry. "Our officers are highly trained to spot inconsistencies, and I’m proud of their actions leading to such a significant seizure."

The Detroit Field Office, which covers all ports of entry throughout Michigan says it has seen a significant increase in narcotics seized over the past 12 months.