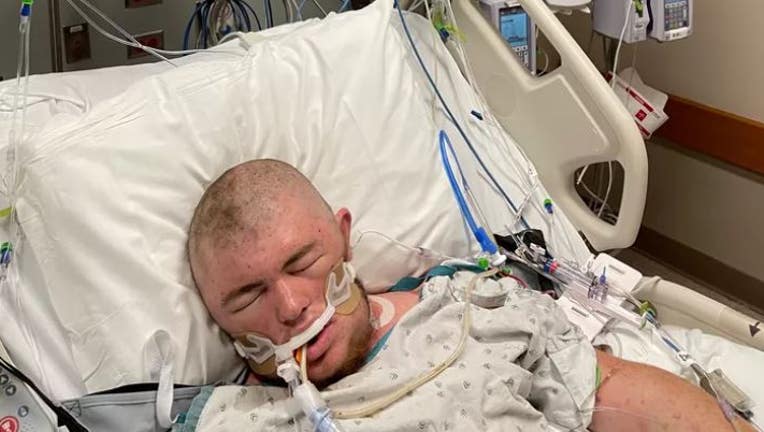 A GoFundMe photo shows Austin Bellamy in an Ohio hospital.

A 20-year-old man remained hospitalized a week after he was stung as many as 20,000 times shortly after disturbing a hive while doing tree work.

Austin Bellamy was reportedly helping a friend cut a lemon tree last Friday and cut right into a nest of what was believed to be so-called African killer bees.

WCPO TV reported that Bellamy had been placed into a medically-induced coma at the University of Cincinnati Medical Center.  He has since woken from it but remains hospitalized.

A GoFundMe set up by his mother reported that he is still having breathing problems and his oxygen keeps dropping.

Shawna Carter wrote, "He still can’t walk very well still very wobbly but a lot of the swelling has gone down a whole heck of a lot."

She said that her son ingested about 30 bees in the incident and hospital workers had to such them out of his airways.

Carter says he had so many stingers in him after the attack that he felt like he was becoming a porcupine.

The fundraiser had netted more than $16,000 by Friday morning.